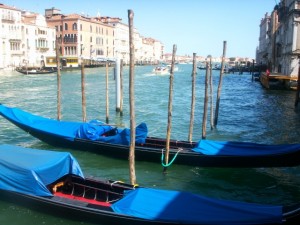 I spent the first week of September at a conference in Padova, Italy, only maybe 30 minutes by train from Venice.  We didn’t get a lot of time to look around, but we were able to take the day before the conference started to visit Venice, jet-lagged and all.

The day started off a bit less than stellar: the train we’d hoped to catch didn’t show.  There was some problem — what exactly wasn’t clear — but they just skipped one scheduled stop.  So we lost one day.  Still, we were able to spend maybe 6-7 hours strolling the streets. 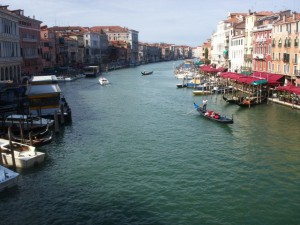 We only made two stops, at the Guggenheim museum and the National Academy, I believe.  Both were interesting, but neither was my cup of tea.  The Guggenheim, a collection of Peggy Guggenheim’s, who lived some time in Venice, was essentially entirely modern art (Picasso, Giro, Warhol, etc).  Not something I get into all that much.  The National Academy, though, was exactly the opposite: many famous Italian religious paintings.  I’ve never been in a place with so many depictions of Jesus.  It was a 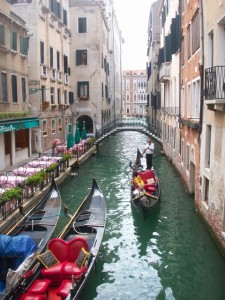 bit overwhelming and underwhelming at the same time.  I did enjoy a couple of depictions of hell and there were a couple of somewhat impressionist paintings of landscapes and rural scenes that I liked the best.  But, overall, it was again not for me.

We spent the rest of the day just wandering the streets, just observing the city. 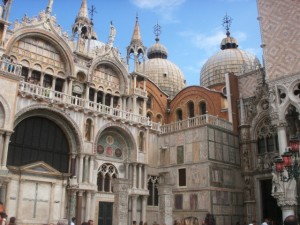 We tried to get away from the main streets, finding the small side paths, exploring the intimacy of the city (so much so that we overheard one teenage girl in a pretty heated argument with her mom from their apartment above the street).

At one point the jet lag hit us and we found a bar and just hung out for a while, watching the tourists pass by and, at one point, a water-borne ambulance stopped just next to where we were sitting.  Thinking about it, it made perfect sense that a city like Venice would need emergency services that went by water, but it wasn’t something that, well, I had thought about before. 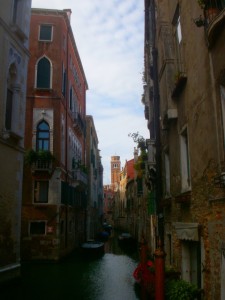 Venice is a really enchanting city.  I really liked how the city is connected via the waterways, that the roads are secondary.  It is certainly a city where you couldn’t drive anywhere; it is the ultimate pedestrian city.  There were plazas all over the place, filled with restaurants.  There were shops all over as well, selling paper, masks, food, and other specialty items.  And, of course, there were tourists.  Many of them.  But not so many that it was annoying, at least not to another tourist.

I would definitely like to return and spend maybe a little more time there, a couple of days rather than just a few hours.  Seeing how it is one of my wife’s favorite cities, I’m sure that such an opportunity will come along some day.