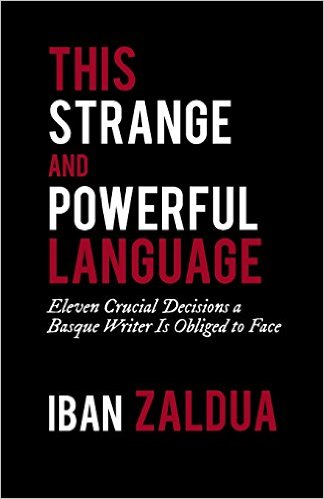 Being a relatively new addition to world literature, and being the literature of a minority culture, Basque literature and the authors behind it face interesting and, in some cases, unique questions that not only shaped the stories that have been produced but helps interpret the context in which Basque literature has developed. These questions include: Should a Basque writer write in Basque or potentially obtain a wider audience by writing in Spanish or French? How should a Basque writer deal with The Thing, as Zaldua refers to the Basque conflict? Will the author be a nationalist or non-nationalist? Will the author emphasize their indigenous exoticism, dwelling on the primitive and mystical aspects of Basque culture?

Zaldua highlights how Basque literature has evolved from a point where simply writing in Basque was an achievement — “There was a time when it was enough to write a grocery list in Basque” — to today, where there are books in Basque that are the equivalent of the trashy novel, not even claiming to some elevated status of literature. However, because of the relative youth of Basque literature, it has suffered from “Adam’s syndrome: namely, attributing added value to a work because, supposedly, it’s the first time that something like that — a police novel starring a retired detective, the chronicle of a journey by a scooter across two or three continents, a poem in which water lilies and high-fiber cereal are mentioned, and so on — has been written in Basque; the truth is that with a tradition like ours, what’s difficult is not being the first to do something.” This passage not only highlights one of the challenges of writing in Basque, but also Zaldua’s wit in conveying these challenges.

Regarding the point about the folk image of the Basque Country, Zaldua quotes Itxaro Borda: “it is obvious that ‘we could never live in a ‘well-mannered’ way on this planet, because we were always required to fit into one of the two fixed stereotypes: that of the shepherd-like nobel savage, or that of the expert terrorist of the highest order.'” Zaldua asks if, with the end of ETA’s terrorism, maybe the only trick Basques have left is that of the nobel savage? I imagine this is a common question of many minority cultures who have been pigeon-holed by the world-at-large into very specific cultural roles.

One thing I’ve come to realize during my time with this website is that, in the Basque Country, most things have a political side to them. Even the presumably simplest of questions, such as “what is the Basque Country,” stir up passions. Basque literature directly dives into this territory, addressing these types of questions head-on. Zaldua navigates that landscape, providing needed context that is often difficult for those not living in the Basque Country to appreciate. While Basque literature may not be as rich as the literatures of countries such as Spain, Britain, or Russia, it is much richer than is immediately obvious to a non-Euskara speaker and Zaldua makes this very clear. With his tangents and side excursions, Zaldua paints a picture of Basque literature that is both illuminating and piques interest in all of the literature that the Basque Country has developed. I’m certainly much more interested in delving into more of the stories he highlights in This Strange and Powerful Language.

One thought on “This Strange and Powerful Language by Iban Zaldua”