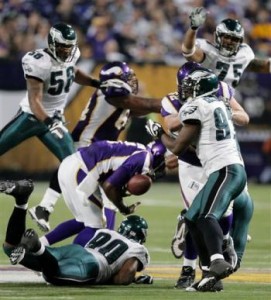 Another season, another disappointing ending.

Driving home from Idaho, we made it to Cortez, CO last night.  We had something like 300 miles to home which, as I drive, would take about 4.5 hours.  Leaving at 10AM, that put us at home roughly at 2:30PM, just in time for the kickoff of the Vikings-Eagles game.  Another playoff game, another hope for glory at the end of the season.

We got out a bit earlier than 10, just about 9AM.  The roads, however, were not so cooperative.  We hit probably the worst stretch of road between Boise and Santa Fe, with some areas covered in snow, forcing us to slow to 35 miles per hour.  Even so, we made it just in time.  We rushed into the house, turned on the TV, and saw the kickoff.

The first half gave hope.  Sure, the Vikes were behind, 16-14, at the end of the first half, but that was due to a Viking interception returned for a touchdown.  The Vikes held the Eagles to 3 field goals and scored two TDs of their own after impressive drives.  If the Vikes could continue that kind of play in the second half, they had a real shot.

Unfortunately, they couldn’t, they didn’t, and the season is over.  There are bright spots on the team, though quarterback is still a weakness.  Jackson showed some good abilities in the first half, but the second half, he seemed to fall apart.  He couldn’t complete any passes and the last few plays, he just was making horrible decisions.  I wonder what the Vikes could accomplish if they had a true quality quarterback.  Maybe we’ll find out next year.  One can hope.