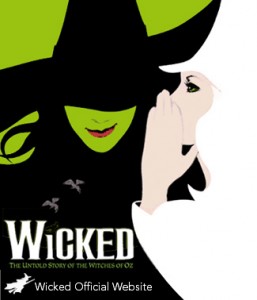 The idea of taking a familiar story — a fairy tale, a common legend, or a children’s story that all of us know — and turning it on its head appeals to me.  I like the idea of taking the familiar and presenting it from a different point of view.  One of the best examples of this that I’ve encountered is Neil Gaiman’s retelling of Snow White in his Smoke and Mirrors.  Gregory Maguire does it in his own way with Wicked: The Life and Times of the Wicked Witch of the West.

Wicked tells the story of the Wicked Witch of the West, known and feared from the Wizard of Oz stories, form her point of view, giving her a name — Elphaba — and a history.  Is Elphaba really wicked, as described in the original Wizard of Oz, or is she on the losing end of history, her story being told by those who hated her most?

Maguire does a great job of creating a background for Elphaba and her sister, Nessarose, the eventual Wicked Witch of the East.  Especially as a young girl and a young woman, Maguire gives Elphaba a depth and richness that is really captivating.  He creates a setting in which the land of Oz becomes a complex place, full of history and politics.  Elphaba grows up in this land and becomes the woman known as the Wicked Witch of the West as a result of the injustices around her.  That is, her becoming “wicked” is a result of the events happening around her.

Overall, I greatly enjoyed the novel and had a hard time putting it down.  I really felt that Maguire did a good job of creating a character in Elphaba that was both interesting and one that I cared for.  The novel centers on her — other characters come and go as time passes.  There are often big jumps in her life as we move from one major period to another.  All eventually lead to the preordained outcome — Elphaba is killed when Dorothy douses her with water.  But, the events that lead to that eventuallity are still compeling, maybe even more so, because the outcome is known.

There were a couple of things that didn’t quite ring true to me.  For a character that is supposed to be so menacing in the original story, there just didn’t seem to be any real reason for Elphaba to be viewed as overly menacing.  She doesn’t do anything that really threatens the Wizard, for example.  She maybe has an outpost in a backwards part of Oz, but how that matters to the Wizard is never really demonstrated, not in a concrete way.  And the last few acts in which Elphaba engages — creating the flying monkeys and obsessing with the shoes Dorothy got from her dead sister — seem forced, as they had to happen to mesh with the original story but they seem either trivial or of no real importance here.  For example, regarding the monkeys, they play a role in helping get Dorothy to the Witch’s castle, but that is the only time they leap into action.  I felt that these types of details, necessary to make Maguire’s Witch become the Witch of the Wizard of Oz, could have been done in a more meaningful way.

Similarly, the appearance of Glinda, the Good Witch, a character that Elphaba knows well from school days, is brief and anticlimactic.  I expected much more from the encounter, more sparks to fly, as it were.  However, again, Glinda’s appearance late in the novel serves to link this story to the original, and not much more.  I felt the relationship between the two could have been developed more, their mutual antagonisum developed more.

But, maybe this is the point of the novel: why was Elphaba viewed as wicked?  What did she do to deserve this reputation?  In the end, maybe not much.  She certainly wasn’t evil by any definition of the word.  Her sister, who ruled with religious conviction, did more harm in the world and was hated by more than Elphaba ever was.  And Glinda, the “Good” Witch, is a socialite who throws around her money and her status and has no real conviction of doing anything worth while.  Only Elphaba, who fails miserably at most of her undertakings, does what she does out of a sense of justice and right and wrong.  And, as a result, is the one who is perceived as the most evil.

Overall, while the ending maybe wasn’t what I expected, it was still a very engaging novel.  I’m not sure I will immediately delve into the other books Maguire has written set in Oz, but they will be on the bookshelf, waiting for a future day.

5 thoughts on “Wicked by Gregory Maguire”