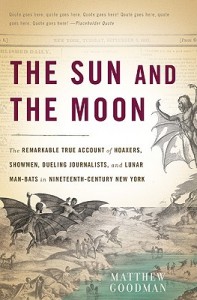 The Sun and the Moon, by Matthew Goodman, was a random pickup, something that I grabbed at the used bookstore because I had credit I wanted to use but, to be honest, while the book’s taglines intrigued me, I had some serious doubts that I would enjoy it. If I’d had to pay full price, I very likely wouldn’t have.

However, The Sun and the Moon is one of those pleasant surprises, one of those hidden gems that delight. It does drag on a bit, with seemingly longer than necessary descriptions of life in New York in the early 1800s. However, as I went along, I began to appreciate them more and more as pictures of a distant time that gave me a better feeling for the New York and United States that Goodman is exploring.

The context of the book is one in which a newspaper, in an attempt to build circulation, publishes a hoax about, of all things, the discovery of life on the moon. One of the most astonishing things about this story is that in the 1800s, such a notion was not so odd that people were all that skeptical. In fact, even educated people believed that bat-men lived on the moon. The hoax, clothed in the language of the science of the day, provided a convincing enough picture that people fell for it, hook, line and sinker. In retrospect, the hoax may be considered one of the first pieces of science fiction. 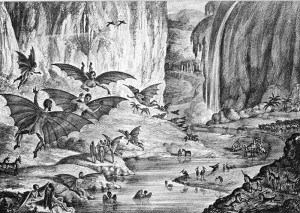 A very interesting side story is that of Edgar Allen Poe, an up and coming poet who was also very interested in both science fiction and hoaxes more generally and who begrudged Richard Locke, the author of the so-called “moon hoax,” for the notoriety he gained that Poe could not. The narrative weaves between Locke, Poe, and the new penny newspaper that, as a consequence of the moon hoax, became the most read paper in the world. PT Barnum also plays a role, perpetuating hoaxes of his own (including a 160-year-old former slave who was purported to be George Washington’s nurse-maid).

In the background of all of this is the life of the average New Yorkers who live in this very vibrant era. And it is that backdrop that proves the most interesting of all of this story. How New Yorkers responded to these sensational “news” stories and the men who told these stories is fascinating. If one can get by the some times flowery descriptions, one is in for a very interesting look into how our fellow countrymen viewed themselves and the world almost 200 years ago.

At that time, the “plurality of worlds doctrine” — that life on other planets was not only possible, but was almost a certainty given God’s vastness — was a common belief (though one stubbornly resisted by the Catholic Church). Charismatic theologians promulgated this belief as an obvious consequence of the greatness of God. The people at the time were thus naturally predisposed to believe in life on other worlds. This tendency to believe in the plurality of worlds was a direct consequence of the strong Christian faith of the country. Goodman quotes De Tocqueville, who remarked at the time that the United States was “where the Christian religion has kept the greatest real power over men’s souls.” It is amazing the degree to which such beliefs have completely changed since then while the basic makeup of the country has remained relatively similar.

One side note regarding Poe was interesting. Poe had a custom to attach literary rivals and others with whom he disagreed. In one such exchange, Poe remarked of a rival: Clark is “noticeable for nothing in the world except for the markedness by which he is noticeable for nothing.” I’ve got to find a way to use that sometime.

Overall, while not of much importance for 21st century citizens, this book offers a tale of human nature and human endeavor that is truly fascinating. From the extraordinary efforts the protagonists go to in building a new type of newspaper to the very different way that people viewed the world, the window this book provides into a different time is worth a few moments of our own.