Lots of things define the 80s, and for those of us who grew up then, we each have our own things we identify with. Ready Player One, by Ernest Cline, is a celebration of all of the cultural phenomena that we grew up with. 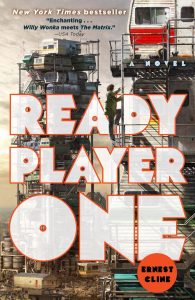 Recommended to me by both my brother-in-law and a friend, Ready Player One is the type of frollicking read that I couldn’t put down. The basic premise is that, in a world that has declined and in which there are either the haves or have-nots, the only escape most people have is a virtual reality game environment that is a supped-up mash-up between Facebook and MMORPGs. Everything is done through VR, including schooling. However, the creator of this technology and this world, upon his death, initiates a quest for control of the world and his real-life fortune.

It turns out that this guy, this uber-Bill Gates character, was also a fanatic of 80s culture, being the decade he grew up in. So, his world and his quest are built around references to Atari games, Dungeons and Dragons, and John Hughes movies. Everyone who wants to solve the quest and win the fortune immerse themselves into 80s culture, memorizing plots and dialogs of movies such as WarGames. Any child of the 80s can’t help but revel in all of the references to everything we grew up with. Adding to that a riveting plot and a rich world full of fascinating characters, Cline has created a roller coaster of a book that is part wish fulfillment and part action-packed thriller, with the action taking place both in the real and virtual worlds he has created.

The idea of virtual schooling is both exciting and troubling. Of course, there is very little real-world interaction in the virtual school, but, at the same time, the students learn by standing “on the volcanic surface of Io while our teacher explained how the moon had originally formed.” I’m sure our own society will move in this direction, it is only a matter of how far.

My own 80s childhood was more defined by role playing games and computer games than with movies, though I was a fan of movies like Ladyhawke, WarGames, Red Dawn, and The Last Starfighter. Though, my RPG system of choice was Rolemaster. I was the quintessential 80s nerd/geek.

Ready Player One is a celebration of the 80s, the decade when computers began to become ubiquitous and popular culture brands began permeating every day life. At the same time, it places a lens on how popular culture defines and molds us, and thus provides some introspection on the relationship between the media, of all forms, and our own lives. As technology becomes ever more pervasive, newer generations will have to synthesize these different worlds even more than we did, in ways we can only imagine. Ready Player One, in some sense, prepares the way, showing what that world might look like.