Everyone knows The Princess Bride, the movie. And I expect most people realize that it is based on a book, as implied by Peter Falk’s character reading the story to his grandson. I decided to read the book for myself. I also recently rewatched the movie with my daughter and her grandparents. While the movie is still good — it holds up after so many years — the book is much, much better.

Goldman’s wit and style are so simply excellent. The conceit of the book is that Goldman is abridging his favorite story from his childhood, a story that, much like Falk in the movie, was read to him by his father when he was sick. Goldman claims that the original book was written by S. Morgenstern and that he is simply cutting out the boring parts (he says that he tried to get his own son to read Morgenstern’s version (never actually having read it himself) but his son got stuck on the 60-page genealogy of the kingdom of Florin). In his personal notes — interspersed through the story — Goldman describes his cold psychiatrist wife, his overweight son, their new-found relationship when his son gets married and has his own kid and so on. His observations of his own life are sharp and often cutting: describing his return home after a long business trip (Goldman was also a writer for movies), he says “All I know is, I hate being away but coming home is the worst.”

But, the real gem is the story of Buttercup, Wesley, and the would-be criminals that try to kidnap Buttercup to start a war. The plot is almost identical to the movie (or, rather, the movie’s plot is almost identical to the book), but with extra elaboration that gives the story so much more depth. Sprinkled with Goldman’s witticisms (or, rather Morgenstern’s), the story is simply marvelous. There is constant commentary about the history of Florin and the world more generally. For example, describing one scene during which Buttercup and her family are having stew, he says: “(This was after stew, but so is everything. When the first man first clambered from the slime and made his first home on land, what he had for supper that first night was stew.)” And later: “(This was after taxes. But everything is after taxes. Taxes were here even before stew.)” This kind of commentary is sprinkled everywhere and makes the story that much more interesting.

Of course, Goldman’s characters also display their own wit. Once, when Buttercup’s mother is urging her to rest, she says “Terrible things can happen when you’re overtired. I was overtired the night your father proposed.” When the Sicilian is explaining the plan to kill Buttercup, they have this exchange: “‘I don’t like killing a girl,’ the Spaniard said. ‘God does it all the time; if it doesn’t bother Him, don’t let it worry you.'” Of course, there are the classic lines from the movie: “‘He’ll never catch up!’ the Sicilian cried. ‘Inconceivable!’ ‘You keep using that word!’ the Spaniard snapped. ‘I don’t think it means what you think it does.'”

Goldman also offers his commentary on life more broadly. Once, he has Fezzik’s mother tell him “‘Life is pain,’ his mother said. ‘Anybody that says different is selling something.'” And when he describes his own interaction with a former teacher of his, his teacher tells him “‘Life isn’t fair, Bill. We tell our children that it is, but it’s a terrible thing to do. It’s not only a lie, it’s a cruel like. Life is not fair, and it never has been, and it’s never going to be.'”

Goldman ends the version of The Princess Bride that I have with the first chapter of the sequel, Buttercup’s Baby. This is an excellent beginning of the next chapter in the story of our heroes. Unfortunately, there is only one chapter and Goldman never wrote any more. It seems that he wanted to write a sequel but never fully thought of a story he wanted to tell. Which is too bad, because the hint in the first chapter of Buttercup’s Baby promised a story of high adventure, deep wit, and great characters. 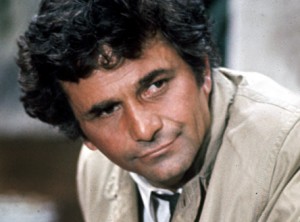 I’m sure a million postings have been made today in remembrance of Peter Falk, but, given the place he and his character holds in my memory of my childhood, I thought I’d add one more.

I don’t have the best memory, barely remembering what I did yesterday, much less much from my childhood.  But I do remember a time when my parents had a very small TV — smaller than the monitor of my Airbook — in their bedroom.  Black and white, if I remember right.  And I remember all of us — my parents, my brothers and me — squeezing into their bed late at night (for little kids, anyways) and watching a bit of TV.  And I remember my favorite show being Columbo.  I don’t remember any episodes and barely remember the characters, but I do remember the guy in the trench coat solving mysteries.  And I remember thinking it the greatest thing.  Columbo and The Rockford Files were my two favorite shows.

Looking back and seeing an occasional rerun now and then, Columbo still holds up.  The character Peter Falk created is just great.  The guy no one thinks is at all competent, but is really the smartest guy around, unassumingly solving crimes while those around him don’t realize he is doing it.  I tried to get my wife to watch an episode of The Rockford Files a few years ago and it sure felt dated, especially Jim Rockford’s attitude towards women.  But, I expect Columbo would hold up a lot better.

They were talking about Peter Falk on NPR on the way home today.  They mentioned he had a glass eye and he used that to great affect to create the bemused and sometime befuddled expressions Columbo had.

There seem to be a lot of shows from my youth — Columbo, MASH, and, yes, even The Rockford Files — that had great characters and, to me, just aren’t matched today in quality.  Maybe I’m becoming that grumpy old man that will soon be saying “Back in the old days…” But, it really does seem that they just made them better back then.