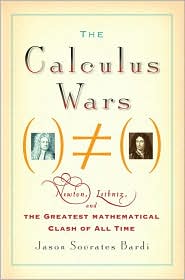 2 thoughts on “The Calculus Wars by Jason Socrates Bardi”