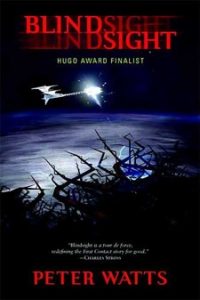 There are two types of science fiction. There is what one might call “soft” science fiction, in which the setting is some futuristic or advanced technological place, but there is no real effort to try to ground the science in, well, science. As has been said, advanced techology might be indistinguishable from magic, and soft science fiction doesn’t even try to distinguish. To me, Star Wars is the epitome of this. It is essentially a fantasy story taking place amongst the stars.

In contrast, hard science fiction tries to base its world building on sound scientific concepts. Of course, liberties always have to be taken, since, if you are writing about a far-off future or an alien civilization, we don’t know all of the relevant science and one has to invent something. But, hard science fiction tries to do its best to extrapolate from what we know rather than simply invent new stuff that is indistiguishable from magic.

Blindsight, by Peter Watts, is an excellent example of great hard science fiction. Without spoiling the plot, the story evolves around a crew of humans sent from the Earth to investigate what seems to be a signal from an alien ship. None of the humans are normal. They have all been modified in some way, or have special abilities that somehow came about naturally.

The plot is essentially a vehicle for a discussion on what makes a being intelligent. The human characters have had their mental states modified in some way — one can directly interface with machines, another has deliberately created multiple personalities residing in one head to create diversity directly in the mind, and another is a vampire, an ancient race that humans have somehow revived and who have a prey-predator relationship with humans and thus a different level of intelligence. Central to this discussion is whether a being needs to be self-aware to be intelligent. Are these concepts inherently connected, or can intelligence exist in a being that isn’t aware that it itself exists? I guess, vice versa, one can ask if self-awareness automatically implies some level of intelligence.

At the same time, what distinguishes different levels of intelligence? What relationships doing beings of different relationships have? In this story, vampires are higher on the food chain than humans, so are humans to them essentially what cows are to us? Are we a lower life form and thus suitable for a food source? If aliens are out there, if they are more advanced than us, how might they treat us? If there are superior beings, “why should man expect his prayer for mercy to be heard by what is above him when he shows no mercy to what is under him?”

Good fiction makes us think about big questions, whether it is about the nature of relationships or our place in the universe. Blindsight asks hard questions about what is intelligence and what does it mean for creatures of different levels of intelligence to interact. How should those roles be defined? And, ultimately, what makes us human? Sometimes these questions get buried underneath “technobabble” in which pseudoscientific jargon is used to create an air of the future (though Watts has done his research and bases his world on as much hard science as he can find). But, those questions are there and they certainly engage one’s brain. And, on top of that, the plot is engrossing to boot.