Bad things happen all the time, and many of us wonder “what if?” What if I hadn’t failed that test? What if mom and dad hadn’t gotten a divorce? What if I’d asked that girl to the prom? 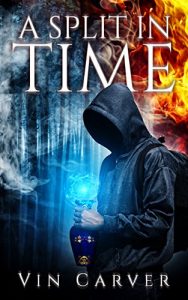 For Warren, it’s what if my brother hadn’t died of cancer?

Warren’s home life is a mess. His dad, already a heavy drinker, becomes an alcoholic when his son dies. His mom does her best to keep the family together, but it is taking a toll. And Warren, well, on top of all of the typical teenage angst (why does that girl he has a crush on like his best friend instead), is dealing with this mess of a home life.

Somehow, though, he finds his way to another world in which his brother didn’t die, and his life is idyllic. Which would you choose?

A Split in Time, by Vin Carver, follows Warren’s adventures as he discovers this alternative universe in which his life is everything he wishes it had been. Along the way, he meets various interesting characters, some diabolical. It turns out that Warren’s adventures play out in the backdrop of a much greater context, one only hinted at. It is clear that Carver has built a bigger world with epic stories in store, but only touches the surface in this story.

The strength of this book is the characters. They are well developed with strong motivations. Most (but not all) of the story is told from Warren’s perspective and Carver does a great job of conveying the point of view of a teenager. Most of his other characters similarly come to life on the page. As a word of caution, some of the characters can be pretty brutal. I wouldn’t say it is gratuitous, but there is a dose of violence that adds to the darkness of this world.

If there is a weakness, it is only that some of the more supernatural components are not fleshed out enough to understand how this world works. I assume that will be the subject of follow-on novels. Some of the grander elements feel a bit jarring when they are introduced, like they were forced just a bit. What is clear is that Warren finds himself as part of something bigger. What that something is isn’t entirely clear, yet.

As a first chapter in a much longer series, A Split in Time does an excellent job of introducing an intriguing world with captivating characters. It sets the stage for something bigger. I look forward to finding out what that is.