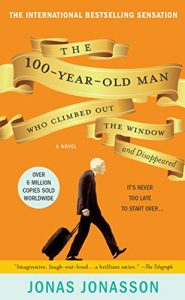 Allan Karlsson is turning one hundred years old. The mayor is coming to help him celebrate in his retirement home. But, Allan doesn’t want a celebration. He wants to escape. And, so he does, by simply climbing out the window before the party starts.

Karlsson is a Swedish Forrest Gump, of sorts, but with more wits about him. His story, The 100-Year-Old Man Who Climbed Out the Window and Disappeared by Jonas Jonasson, follows both Karlsson’s adventure after his escape from the retirement home as well as his past, when he rubbed shoulders with the most powerful people in the world and had a hand in changing world events. He even makes a fateful appearance at Los Alamos, making a suggestion to the most eminent physicists in the world that makes all the difference in their quest to beat the Germans to the bomb.

I won’t give away too much of the plot, as the joy of the novel is to discover who Karlsson is going to cross paths with next and what those interactions will lead to. Suffice it to say that Karlsson’s adventures take him all over the world and his wits and expertise with explosives save his butt on many occasions. While Karlsson is clearly a clever guy, he is as apolitical as they come, and doesn’t give a whit about the ideologies of those he comes across. As long as they have a stiff drink ready and can make some use of his explosives expertise, he is a happy man. Given that these two conditions are met most of the time, Karlsson is happy most of the time.

As with any grand adventure of this type, there are a lot of coincidences that move the plot along. Maybe these are deus ex machina type plot devices, but given the almost ridiculous nature of Karlsson’s adventures, they actually work well here. Karlsson’s story is bigger than life, and the events that propel it forward are as well. In lesser hands, this story could have easily derailed into the absurd but Jonasson juggles the events deftly and keeps things moving apace in a way that both keeps one engaged and is reasonably reasonable, given the absurd role Karlsson plays in the events of world history. A highly entertaining read with cameos from some of the 20th century’s most famous and infamous figures.