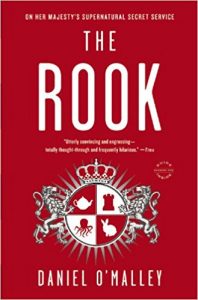 Myfanwy (pronounced like Tiffany, but with an M) Thomas lived in a world in which some people are born with supernatural abilities. Imagine the X-Men, but with a wider range of powers (some not altogether that useful) and no colorful costumes. Myfanwy’s employers, the Checquy, are a secret society that has been around for centuries and works with the British Government to protect the United Kingdom. Myfanwy was one of their best employees, having risen through the ranks to a position of relative power. However, Myfanwy Thomas no longer exists. Her brain has been wiped clean and a new personality inhabits the body that once belonged to Myfanwy. This is the world of The Rook, by Daniel O’Malley.

Without giving too much away, this new Myfanwy — for the new personality adopts the old inhabitant of her body’s life — has to learn both her role in this supernatural world and the reason the old Myfanwy was eliminated. During the course of her journey of both self- and world-discovery, Myfanwy encounters foes that are centuries old, that the Checquy has fought against before.

O’Malley has created an interesting world with “mutants” that are surprisingly fresh. I won’t reveal their powers here, but some of them are very inventive. O’Malley also has a way of bringing his characters and world to life. He has a way with words. At one point, describing the formation of the American counterpart to the Checquy — the Croatoan — he describes one of the first supernatural people to work in the Americas as being “condemned to a tedious backwater populated entirely by religious fanatics whose idea of fun was not having any.”

The world of The Rook, while built on a supernatural foundation, still connects to science in a strong way. The powers of the characters work in pseudo-scientific limits. The Checquy’s foes are rooted strongly in the biological sciences. The world O’Malley has created is one in which, yes, the supernatural is a strong element and people do have absurd powers, but they fit in the world, they aren’t out of place. Combined with O’Malley’s strong sense of pacing — The Rook reads like an action movie of sorts — this is an entertaining thrill ride in an oddly parallel world. The Rook is not the deepest reading in the world, but it is an exciting one.