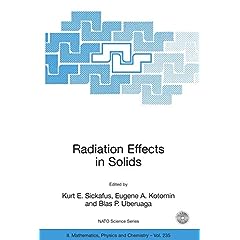 My first book is out! Ok, not exactly. But, I am a co-editor of the “hot new release” (seriously, that is what Amazon is calling it) Radiation Effects in Solids, edited by myself, Kurt Sickafus and Eugene Kotomin. I’m also co-author, with Art Voter, of one of the chapters on Accelerated Molecular Dynamics Methods.

This book grew out of a summer school that Kurt Sickafus held in 2005, I believe, in Erice, Italy. He brought together many experts on radiation effects in solids who gave lectures to the next generation of researchers in the field. The timing couldn’t have been better, as the United States, along with a number of other countries, is reexamining nuclear energy as a crucial component of the nation’s energy portfolio. Since the Carter administration, no new nuclear reactors have been built in the US and, correspondingly, the expertise in areas such as nuclear materials has diminished.