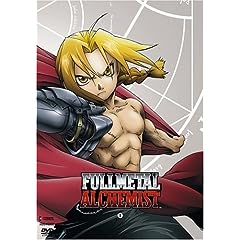 I just finished watching the anime series Fullmetal Alchemist, which is based upon a comic book of the same name. It is about two brothers who live in a world where a form of alchemy exists. Specifically, certain people can transmute matter from one form to another. Without spoiling the show, the brothers are trying to find the power to fix their bodies, which they damaged when performing a special transmutation.

Most American cartoons are pretty shallow, being little more than independent 30 minute episodes that really don’t build upon one another. Of course, this isn’t 100% true, as shows like X-Men and Justice League Unlimited had story lines that lasted seasons. However, Fullmetal Alchemist does them one better in creating a world and a story that continues to build upon itself for 50+ episodes. Each episode reveals more richness in the world as the brothers Elric discover more about how alchemy works and the major players in their world.

The story touchs a number of deep subjects, including the costs of war, the atrocities that are committed during war, the nature of truth, the role of science (in this world, alchemy) in society, just to name a few. The brothers, though young (early teens), become quite the philosophers through the course of the show.

There are some things that annoyed me. When trying to display extreme emotions, the art gets a bit more cartoony than I like; it breaks the flow of the rest of the animation, which is more realistic and generally quite good. I also didn’t like that one of the characters, Armstrong, constantly is flexing his muscles for all around to see.

Overall, though, I think this is an excellent series with a deep story line and involving characters. I highly recommend it!