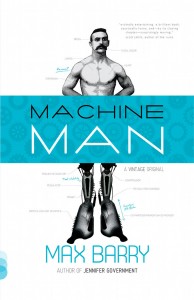 Max Barry is a master at seeing our world and distorting it to extremes in order to reflect it back to us in all of its absurdities. His previous novels, Syrup, Jennifer Government, and Company each looked at the disfunction implicit in how our society functions and, in doing so, gives us a new perspective in where we might be heading.

Machine Man is no different. When an engineer, Charles Neumann, loses his leg in an accident at work, the way he responds is very different than how most of us might in his situation. Being an engineer, he begins to improve on the prosthetics he is issued at the hospital. However, once he realizes that the new leg he has built is better — faster, stronger, and smarter — than the leg he used to have, he embarks on a journey of self-improvement the likes of which the world has never seen.

Of course, Charles is simply taking being an engineer to a completely new level, reengineering his own body. However, at some point, his bosses take notice and see other uses for what Charles is doing. What happens when Charles’ inventions are viewed not only as improvements on prosthetics but also as products to be sold, including to the military? And where does Charles’ self-improvement end? These are the basis of a plot that does more than just take us on a wild roller coaster ride, but also tries to shed light on the question of what it means to be human.

In an age in which one form of self-improvement — doping — is ubiquitous in professional sports, one can ask what happens when trying to improve on human biology is taken to the extreme. Barry offers us one glimpse of what might be. It’s a vision both thrilling and a bit disconcerting.