If you’ve never read William Gibson, it can be a chore to get going. He takes the adage of “show, don’t tell” to an extreme, not really describing the worlds he creates as much as throwing you in to the middle of them. He invents jargon and concepts that he throws at you as if everyone knows what they are. It is only by reading, by immersing yourself in his world, that you can learn what he is saying. But, the end is always worth it.

The Peripheral is another such story. As with all of his books, Gibson creates a near-future world, taking some of our current trends in technology and society to an extreme. Here, he creates two worlds that somehow communicate with one another through devices, through peripherals, that are essentially robots that people temporarily inhabit, giving them a new identity — a new body, a new gender, a new experience — at least for a while. Understanding the relationship between these two worlds is part of the story, so I won’t give it away, but it is another intriguing world that Gibson has built. He creates concepts that are alien but built upon our own experiences that are ingenious. For example, describing how two characters secretly talk to one another:

Whatever randomly synthetic language the one spoke, the other understood. Never the one thing long enough to provide a sufficient sample for decryption.

That is, these two characters speak in almost random sounds — now like birds, the next in grunts — that only they can understand. And they don’t speak in any one long enough for anyone to figure out what they are saying. The story is filled with these technological marvels that flesh out Gibson’s futuristic visions.

The main characters, Flynne and Nick, find themselves trying to save Flynne’s world from some truly nasty people who’s only concern is power. These people almost seem like evil incarnate, but, really, what is evil? Such people don’t view themselves as evil. Gibson touches on the nature of evil: “That evil wasn’t glamorous, but just the result of ordinary half-assed badness, high school badness, given enough room, however that might happen, to become its bigger self.” He also touches on climate change and the dangers it poses to the world, and how governments manipulate our every day lives.

I always find Gibson entertaining and thought provoking. His worlds are both alien and familiar, with technological marvels that you both covet and are repulsed by. I look forward to the next one. 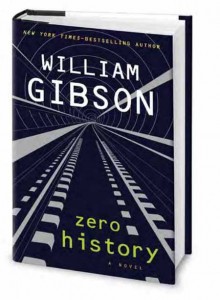 William Gibson just has a knack for taking you to a different world, whether a dystopian future of post-war America or into the marketing frenzy of fashion in contemporary London, he has a way with words that is both foreign but oddly captivating.  The first book of his I read, his classic Neuromancer, epitomizes this: he is throwing around fictional names and brands and events as if they are something everyone is familiar with.  It took me a while to just stop thinking about every name and let myself get absorbed into his universe.  Neuromancer is one of, if not the, first cyberpunk novel, set in a world where humans interface directly with machines, cybernetics is commonplace, and cyberspace is all pervasive (Gibson coined the term cyberspace).

Since then, his novels have actually become less rooted in science fiction and set more in the contemporary world.  This is particularly true of his latest novel, Zero History, which follows a set of characters involved in, of all things, fashion and the development of new brands.  The driver behind the events of the story, Hubertus Bigend, owns an advertising agency and is trying to cash in on the latest fad in fashion: a brand that is so exclusive that it does no advertising, people are just alerted to random shipments.  In the background, though, Bigend has bigger things going on, specifically trying to predict the stock market, get that extra bit of information that will let him predict trends.

The main characters, Hollis Henry and Milgrim, really drive the story forward.  Milgrim is a paranoid ex-druggie who Bigend has helped clean up.  Hollis is a former rock star who does journalism gigs, sometimes for Bigend.  In trying to find the people responsible for this viral fashion marketing campaign, they team up.  While there are no world-scale dangers involved here, the action is just tense enough to keep things moving, driven in large part by Milgrim’s paranoia.  He doesn’t know who to trust and begins doubting not only the people around him, but the things around him too.

Technology doesn’t play the same overriding role it did in earlier Gibson novels, but it is ever-present, especially in how it can be used, in the particular case of Milgrim, to track him around the globe.  Gibson touches on things like locative art (location-specific art that is virtual, you can only see it on your phone/computer), guerrilla fashion, advanced computer algorithms for predicting the stock market, and how just by using your phone or computer you can be easily tracked.

These hit home even more than the more far-off tech that he used in prior novels as this could happen now.  Whatever we are familiar with, whatever we think we know about the state-of-the-art, the fact is that governments, militaries, and corporations have much more sophisticated technology.  Gibson explores this secret world, drawing us in to that world in a way that both entertains and educates us, just a bit.  It’s a world where forces bigger than us are at play, where we are small compared to everything around.  And it is a world that probably isn’t all that different than our own.