In recent years, my wife and I have tried to reduce the commercial aspect of the holidays by making at least some of the gifts for family ourselves. Given that I’ve been trying to get into woodworking a little bit, much of what we’ve made has been made from wood.

This year, our gifts for our siblings and parents were a family effort. Inspired by a coat rack that Lisa’s grandfather had made, we made hat racks (the hooks aren’t maybe as strong as on the original model). I borrowed a router from a friend and got the wood from another friend who had some scrap pieces just the right size lying around. This was the first time I’d used a router. I did it free-hand, which made it just a little more difficult to keep everything level and straight, but I think in the end they turned out well.  I used a different routing bit and/or different routing depths for each of the pieces.

We then had our daughter write out everyone’s names in her unique 3-year-old script and I then wood-burned everyone’s names into the wood. For each family, we gave each family member a different hook, with their name burned above their hook.  For the grandparents, we put each grandparent’s name and then the names of all of their grandchildren (fortunately, our parents didn’t have as many kids as our grandparents, as we would have needed literally 6 foot long hat racks).  Lisa finished them by varnishing them. We got the hooks at the local hardware store, going for a rustic look. The final products were not the most sophisticated things in the world, but I think they turned out nice. When we were at my parents’ house for Christmas, I hung up their rack, which fit perfectly behind their door.  Now all of the grandkids have a place to hang their stuff when they visit amuma and txitxi!

For all of the cousins and friends, we made more marker holders. A year or so ago, inspired by an image I’d seen on some blog, I made a marker holder that Lisa then painted to look like a ladybug. This year, we made 6 more, a camel, a snail, a bee, a spider, a turtle, and a bug. Lisa did a great job taking almost abstract lines cut into the wood with a Dremel tool and making them marvelous little creatures. The spider, in particular, I really liked, with all of it’s eyes doing all different things (this spider only has 6 eyes; while more than 97% of spiders have 8 eyes, there are a few that have 6). Our daughter uses her ladybug all the time, as it makes it super-convenient for her to have her markers out in a way where she can easily grab the color she wants. I hope the other kids get as much use out of theirs.

For Lisa, I made a trivet. This was a bit trickier than the hat racks, as I made a relatively complex shape that incorporates our names.  I used a sort of square font that I’ve played with since I was in grade school, using it in the past for various doodles and such. This seemed a perfect project to use it as I wanted a shape that was pretty solid and interconnected so that it would support a pot or pan. The lines between the letters were Dremeled out while the lines defining the interior of each letter were first Dremeled and then wood burned.  The outside was routed. In the end, while it jumps out at me, I’m not sure the letters are very clear to someone who didn’t actually make the thing. I guess my initial piece of wood was not very flat as it doesn’t sit completely flat on the table. And the wood varnish I used maybe isn’t the best for very hot things (some pots have stuck to the varnish). Some things to think about next time.

The last project was for our daughter. A couple of years back, while visiting Lisa’s parents, Lisa’s dad showed me how to use his lathe. Just playing around, I’d made a few little figures representing Lisa, me, and our daughter. This year, we expanded her little wooden family, with figures of grandparents, all of the cousins, and even a snow man and Santa Claus!  There is still more family to do — we are debating whether to continue the expansion to her aunts and uncles — but I think at the very least I have to do a little wooden frog at some point. Lisa did a wonderful job painting these, giving them character and making the resemblance to their real-life counterpart very close. On the back of each one is that person’s name, so our daughter also has a way of learning how to spell everyone’s name.

We’ve been sort of waiting until the last minute to get these done. The hat racks were literally finished just days before the last shipping day. But, it is nice to make something, rather than buy some piece of plastic. Maybe we aren’t doing our part to support the economy (though the wood and other supplies do add up). But, I also think our economy needs a new basis besides just buying things.

Not sure what we will do next year. I slowly keep expanding our shop, which gives me more flexibility in what to try to make. But my skills are still pretty novice and time is a factor. However, we’ve also turned to wood crafts for the party favors for our daughter’s upcoming birthday. More on that later. 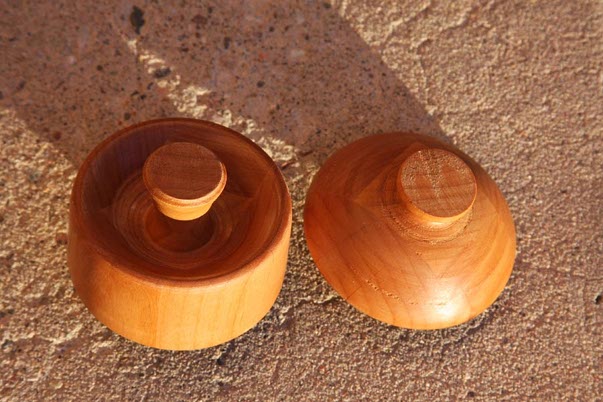 Over Christmas break, Lisa’s dad let me use his lathe again, and I made a few more tops.  I made 4 in all, but two of them we gave to friends before we snapped a picture.  In any case, here are two of the new ones with the old ones.  One of them, the one on the right in the first picture, 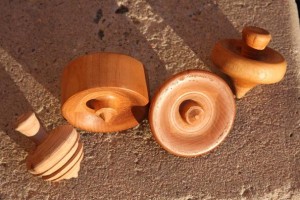 I also gave to a friend, Bob.

The handles aren’t quite as polished as I would like and the tips that they spin on aren’t as smooth as I would like to give the whole top a nice smooth look, but overall they turned out alright and do a decent enough job of spinning.  I was maybe a little aggressive trying to by fancy by carving out towards the inside of the volume, which made it a bit difficult to sand them properly, so that is why in the second photo the third top has a bit of a rough edge.  I started to lose a little patience with the sanding.  But, still, they look good, were relatively easy to make, and were fun to make too. 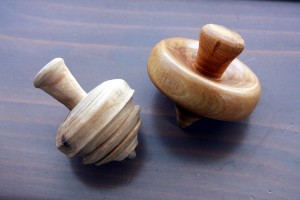 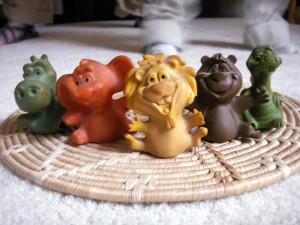