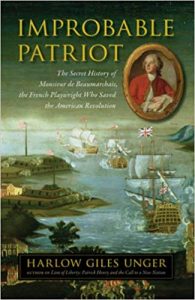 How is it we don’t know who Beaumarchais is? He is most famous, these days anyways, for being the author of the plays The Barber of Seville and The Marriage of Figaro — he created that iconic character. Before that, as an apprentice to his dad in his clockmaker’s shop, he invented the wrist watch, the first watch that could be comfortably worn on the wrist, and made custom watches for the king and queen of France. He became an international businessman, amassing a fortune. He is the embodiment of the rags-to-riches story. But, perhaps most importantly, he, almost single-handedly, saved the American Revolution.

Beaumarchais was born Pierre-Augustin Caron in Paris, in the same year that George Washington was born (he would also die in the same year Washington died). He later gained the title Beaumarchais through his connections and his ability to buy a title. From the beginning, he displayed great and varied talents, from singing and music, to engineering. Being the only son in the family, it ultimately fell on him to take care of his sisters and parents. After a brief interlude as a teen when he was out carousing with friends too much for his father’s taste, and his father kicked him out of the house, he became a responsible head of household, ultimately taking care of the entire family.

Harlow Giles Unger’s portrayal of Beaumarchais, The Improbable Patriot, reads almost like a spy thriller. In the background, you have the world-shattering events of the American Revolution and the precarious state it was in. Washington had a relatively small number of raw recruits, little-to-no equipment, and a Congress that didn’t have the power to help. At the same time, France was ruled by despotic kings and similar-minded nobility, who could not stand that a commoner such as Beaumarchais could rise up in the world. More than once, Beaumarchais was imprisoned simply because he pissed of the wrong nobleman. This came with a loss of citizenship and the rights that went with it.

All the while, there is Beaumarchais himself, seemingly master of any task he put his mind to. By the time of the American Revolution, Beaumarchais was already a well known playwright, with The Barber of Seville already a smashing hit. His character, Figaro, embodied much of the revolutionary sentiment, and may have inspired, at least in part, the French Revolution (“A tiny gust that extinguishes a candle, Figaro reminds his audience, can ignite an inferno.”). He had also become a very successful businessman, tutored by the French magnate Paris-Duverney. But, Beaumarchais already had many enemies when he proposed to the French foreign minister that France absolutely had to help the Americans in their fight against the British, that they would lose without such help. He sold it as a way for France to regain the possessions she lost after the Seven Year’s War. Beaumarchais proposed an elaborate scheme to set up a shell company, giving it a Spanish origin, and using it to sell French arms and equipment to the Americans in exchange for goods. To do this, he got a massive loan from the French government, which would in principle be repaid by his selling American products on the European market. Unfortunately, because of American political backstabbing, he never really got his due from the American government. However, his shipments to America made a significant, perhaps pivotal, difference in the fight with Britain.

Though Beaumarchais didn’t play a significant role in the French Revolution — though he had humble beginnings, he was wealthy and conspicuous with that wealth at the time of the storming of the Bastille — he lived in an age of enlightened thought against the ways of despotic power. Voltaire, not exactly a contemporary, was still alive during Beaumarchais’ time and even asked the man to publish his complete works. Beaumarchais had been inspired by the works of Frenchmen such as Voltaire and Rousseau, who had strong views on the origin of power and the current state of the world — “The first man who, having enclosed a plot of land, took it into his head to say this is mine and found people simple enough to believe him, was the true founder of class society.” In some sense, Frenchmen like Beaumarchais viewed America as the embodiment of the ideal society that French revolutionary thinkers discussed. He was ultimately disillusioned when political squabbling led to his debts being unsettled with the Americans.

At the same time, the French Revolution went further than the American Revolution, leading to mass riots and the Terror that saw large numbers of French put to death and the imposition of a new kind of dictatorship. While Beaumarchais certainly wanted change, he felt this had gone too far: “In trying to straighten our tree, we have made it bend in the opposite direction.” He came to see that people of all classes were similar. As Unger says, “The aristocracy had violated him early in his life for rising above his station to champion commoner rights; now the commoners whose rights he had championed had violated him, and he realized that commoners were as capable of injustice, cruelty, and arrogance as the aristocrats they despised — no better, no worse. Power rendered them all the same.”

Beaumarchais seemed to have an attitude toward life that was live it to its fullest. After being imprisoned in a miserable French prison, on the very day he was released he held a party, and chose not to dwell in his injustice: “Why should I lose the time I have with you, my friend, reliving things which only make us miserable.”

Beaumarchais was inspired by the social reform ideas of philosophers like Voltaire and Rousseau, but maybe had a bigger hand in diffusing their ideas. His character Figaro embodied that spirit and spread those ideas in a way that philosophical treatises could never do. Figaro railed against the nobility: “Nobility, wealth, rank, position — it all makes you so proud. And what did you do to earn so many rewards? You took the time to be born — nothing else. Apart from that, you’re quite an ordinary man! while I, by God, lost in the faceless crowd, had to apply more knowledge and skills merely to survive than it took to govern the entire Spanish Empire for the last one hundred years.” If this doesn’t encapsulate the idea of the American Dream, I don’t know what does. That we seem to have lost the admiration for the self-made man seems, to me, unfortunate.

The story of Beaumarchais is replete with spies and international espionage — more than once he is sent on behalf of the king to stop spies from harming the monarchy — the drama of a internationally-reknown playwright, and ups and downs of dealing with petty nobility, and his own family dramas — his father seems to have been a sex-starved old man who was always looking for companionship — all of this in the backdrop of two revolutions. That we don’t learn about Beaumarchais in history classes is truly a shame. History comes alive when you learn about the individuals and their stories, about how decisions that change the world rely on the capriciousness of people, and about how all of us have remarkable stories to tell.

It has been snowing the last few weeks and it always makes Santa Fe look like a magical place to me, especially the graveyards scattered throughout the city.  I went to two of them, the main cemetery of the city and another big one that is nestled between the School for the Death and the Odd Fellows hall.  This last one is very interesting as there is the main graveyard that is enclosed in a fence and then another bit that is outside the fence (you have to drive all the way around) and is not enclosed but contains a number of headstones, include the “Lucy Jackson” one.  There are branches lying around and old buckets full of stuff.  Not sure if people are dumping things or someone is trying to clean it up.  In either case, it is just one of many around town that are just there, part of the scenery.

Earlier this month, there was a report on NPR about how much we (Americans) have driven this year compared to last year.  The result: due to increased gas prices, we have driven 30 billion miles less than last year so far.  And use of public transportation is on the rise, maxing out in a lot of places. It took prices at $4 per gallon to force us to change our habits.  And now, our public transportation system is at the edge of what it can handle.

It is unfortunate that we have little to no foresight.  If, in the 90s, when the economy was booming and everyone was just a bit better off, we had just taxed gas a bit higher and invested all that money in public transportation development, we would be in very good shape today.  Or, going back to the energy crisis of the 70s, if, after gas prices spiked and started to fall, if we had taxed gas somewhere between the high and the low, it wouldn’t have felt so hard and we would have 40 years of money to develop public transport.

But we never have any foresight.  It is always about the here and now; our immediate future, not the long-term consequences of our actions; our personal self-interests rather than the interests of the “greater good”.  I wonder if this is a consequence of our democratic system:  politicians have to focus on 2, 4 or 6 year cycles, so they have to do things that have results on that kind of time scale.  They can’t plan so easily for longer term results as that will have little impact on the next election cycle.  Or maybe that is a consequence of us, the electorate.  Maybe we can’t see past today, can’t see what we will need tomorrow and elect people who plan longer term.  I don’t know.  All I know for sure is that, with some foresight, we would be in a much better place today than we are.

Well, I just upgraded WordPress, because there were some supposedly important security fixes, but it seems that it is incompatible with the Theme I was using.  And the official repository of WordPress Themes seems to be broken (most of the screen captures are just black), so for now, I’ll have to use the default.  I’ll see if I can find a better looking Theme soon.