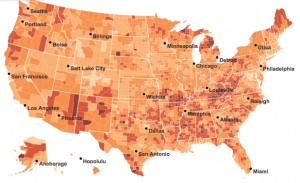 During the health care debate, one thing that has been a talking point is that the people who are on the lower end of the economic ladder are there at least primarily due to faults and errors of their own.  This is an inherent assumption of the American Dream:  “Life, liberty, and the pursuit of happiness.”  Everyone has the ability to pursue their own happiness and, the implication is, if they do not obtain it, it is a result of their own failings, primarily a lack of effort.

At the same time, however, it seems to me that some amount of failure has to be built in to the system.  That is, the system cannot sustain itself if everyone is successful in realizing their dreams, of obtaining their happiness.  There has to be some, even a majority of us, that fail in becoming doctors, lawyers, or whatever they dreamed of in their youth.  We can’t all be at the top of the economic ladder, or better said pyramid.  For the economy, for society function, we need people who end up in those jobs that none of us want, that we don’t aspire to, but are sometimes forced into by circumstances.  We need the sanitation workers, the slaughter house workers, the assembly line workers.  They are absolutely crucial to our system functioning.  But, I dare say, these are typically not jobs we aspire to, jobs that were part of our dream when we were “pursuing our happiness.”

Any individual can pursue their happiness, to varying degrees of ability, opportunity, and circumstance.  But, most of us have to fail.  Most of us have to give up on those dreams in order to survive.  The economic pyramid has to be bottom heavy to function, and none of us aspires to be at the bottom.

I understand that our system in no way guarantees that we obtain happiness, just that we are able to pursue it.  However, that most of us must fail, suggests to me that we who do succeed are not entirely free from any responsibility for those who do fail.  We depend on them, we require them, for a functioning economy.  Therefore, it seems that we should realize that failure to obtain our happiness is not entirely on our own shoulders, but is also a part of the system.  It will happen to most of us, the system ensures that.  As a society, we have some responsibility to make sure those people have some basic standards of living, including health care.