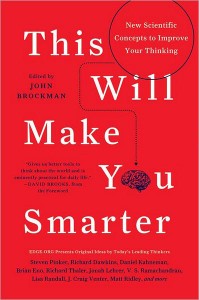 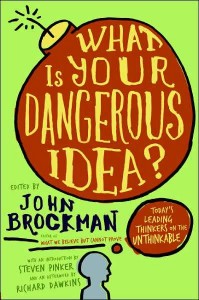 Edge is a collection of people, leaders in fields from physics to biology and successful business people and musicians. People we’ve all heard of, like Alan Alda, Jared Diamond, Steven Pinker, and Richard Dawkins, along with a lot of other people that aren’t yet household names, but are leaders in their respective fields. The goal of Edge is to simply get people — intellectual leaders of all sorts — and have them talk. Have them ask questions to one another, have them discuss important topics and push the frontiers of what we, collectively, know. As they summarize their purpose:

To arrive at the edge of the world’s knowledge, seek out the most complex and sophisticated minds, put them in a room together, and have them ask each other the questions they are asking themselves.

As part of this goal to ask and answer questions, each year the Edge contributors propose and vote on a question that they then each try to answer. This has been going on for a few years now and each year the answers are collected into a book, edited each year by John Brockman. The latest book, which is also the first one I read, is called This Explains Everything and collects the answers to the question: What is your favorite deep, elegant, or beautiful explanation?

The book collects about 150 answers from a large variety of people. Each answer is 1-10 pages and vary from choosing Darwin’s Theory of Natural Selection, to Maxwell’s Equations (what I personally would have chosen if I were part of this), to more modern cutting edge science that, to be honest, is sometimes a bit hard to follow. And it isn’t all science, there are poets and musicians who also contribute their answers.

For me, the best thing about this book isn’t necessarily knowing what Jared Diamond’s favorite explanation is, but rather to get different views on well established science, such as Darwin, as well as become exposed to new ideas that, as a scientist working in a very narrow field, I don’t come across in my daily work. Some of the ideas are simply weird — Aubrey De Grey suggests that it won’t be long until monogamy is a thing of the past, essentially equating sharing sexual partners to sharing chess partners. I’m not sure I buy that one. But, there are a lot of other great ideas which I was very happy to learn about. A couple of my favorites:

(Ok, my list is a little long… but it serves to illustrate some of the very interesting ideas and concepts that were discussed in this book.)

As I mentioned, the best thing about this book was just being exposed to ideas beyond what I encounter in my daily work. Not all of them are things I can personally use in my work, but they show some of the cutting edge work being done in other fields.

I greatly enjoyed the book and have already downloaded my next one from this group, This Will Change Everything.