It’s the 1860s. The East India Company is facing an epidemic of malaria in India. They recruit their former smuggler, Merrick Tremayne, to go to Peru to try to get some cuttings of cinchona trees, from which quinine, one of the only medicines effective against malaria, is derived. To protect their economy and monopoly on quinine, local Peruvian bosses pretty much shoot anyone who tries to take these cuttings. So, Merrick has a daunting task ahead of him, never mind the bum leg he got during a shelling on a previous mission to China.

It turns out the Merrick has a long, if to him unknown, history with New Bethlehem, or Bedlam as it is called, a town near the cinchona forests. Better said, his father and grandfather had a history with Bedlam. As Merrick makes his way to Bedlam, accompanied by Clem Markham, an archeologist, and his wife Minna, he learns a lot about not only Bedlam and its strange inhabitants but also his own connection to the place.

He meets Raphael, a priest, who has a mysterious connection with his grandfather. Raphael is prone to sometimes long bouts of catalepsy, in which he enters essentially a catatonic state. What this means for Merrick and his mission, Merrick must find out.

The Bedlam Stacks by Natasha Pulley is an interesting story. The plot is pretty straight forward — Merrick and Clem must get to Bedlam and get some cuttings of cinchona trees and get them back to India — however, the real wonder comes from the world that Pulley creates. The people of Bedlam have ancient connections to the Inca that once lived there. These connections still inform their lives, particularly Raphael’s. An enigmatic character, we learn the truth about his connections to the Inca as the plot moves along. Pulley has created an interesting world in which the mysterious coexists with the modern, a place where the unknown can still fascinate science-minded characters such as Merrick. Sometimes, Clem and Merrick’s scientific bent blinds them to the reality that is right in front of them. Merrick, in narrating his adventure, describes his skepticism: “More things in heaven and earth than dreamt of in your philosophy — except there aren’t.”

Some of my other favorite quotes from the book include: 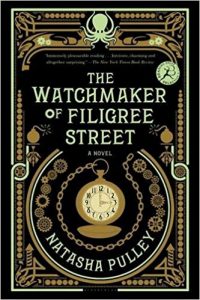