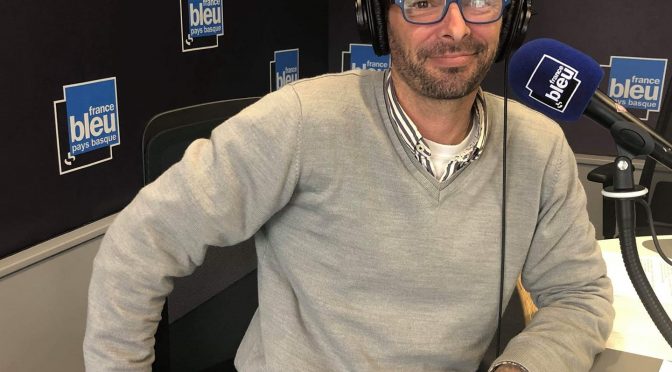 Benoît Etcheverry Macazaga seems omnipresent across the Webscape of the Basque diaspora. Whether through websites, radio, or now webcasts, he uses the thousands of connections he has made over the years to examine the relationship between the diaspora and the home country Euskal Herria. Why? Simply put, his goal is to build stronger bridges between Euskal Herria and the rest of the world through the diaspora to enhance the cultural strength and economic opportunities of all Basques. In this interview, Benoît discusses the origins of his passion for the diaspora, why this work is so important to him, and what future possibilities he sees in relationships between the diaspora and the Basque Country.

Benoît Etcheverry is probably the person in Iparralde who knows the international Basque community the best, as he has been mapping it since 2001.

As such, he has been working for several years for the government of Euskadi, which recognized him as an expert on the diaspora in June 2014. He has notably forged many relationships with the Eskual Etxeak network which were created in order to maintain Basque culture alive far from the Basque Country. Today, there are nearly 200 of these house-embassies in 24 countries around the world and they have more than 45,000 members.

He has also been collaborating since 2015 with the Corsica Diaspora association, particularly in managing the structuring of their network.

Creator and manager of networks by profession, Benoît Etcheverry Macazaga has also hosted the Basque diaspora radio program live and in four languages ​​since 2004 on the Euskal Irratiak radio station and has also collaborated with France Bleu Pays Basque and Euskadi Irratia.

This father, a fan of traveling and cultures of the world, practices Basque pilota — Joko Garbi and Paleta Gomme — and collaborates in numerous associations, such as 8 Probintziak which he founded in 2004. He is also co-founder and President of honor of the euskal etxea of Marseille and Lyon.

Benoît Etcheverry Macazaga’s views the Basque diaspora with respect, tenderness and humor, and his knowledge of the personalities who animate it is a precious asset to strengthen the influence of this “Bascora,” if we want to one day equal the level of political and economic influence of the Breton, Auvergne, Alsatian or Corsican diasporas in France, or all things considered, the community influence of large diasporas such as the Jewish, Indian, Chinese, Armenian, Irish, Greek, and Russian diasporas in the world.

The Basque diaspora, well established in North and South America and officially present in 24 countries and unofficially in a hundred, can be a powerful lever of smart and soft-power for the future. Because if we do unite, we can exert influence like the other diasporas, which do so in a very active and very professional way, explaining their influence in many professional fields and sectors of activity around the world.

There has always been strength in unity, and those who thought that globalization would smooth out the influence of communities were radically wrong; the best organized diasporas see their power of influence increasing for the benefit of their members while the others are forced to disappear.

The choice is before us, for us and our descendants, and if we make the path of revitalization, Benoît Etcheverry can be a valuable ally in strengthening the ties of the entire international Basque community in the future.

Benoît Etcheverry: I’m a Basque from Iparralde and I live in Bayonne. I’ve got 5 lovely children and I’m 48 years old. I love my culture and its story. I’m a very curious person, opened to the world and all other cultures.

BBP: You’ve made it your life’s work to connect with the Basque diaspora, to bring the diaspora to the Basque Country. Why is this such an important topic for you?

Benoît Etcheverry: My goal is to help the new generation using the Basque global community, through the Euskal Etxeak but not only those. I’m also interested in a Basque business network (to be created). As I mentioned before, my motivation came from the fact that I’m a father, and I remember, when I was a kid, I didn’t have any information about the Basque diaspora community.

When I started my work, it was in 2001. At this time, I was president of the association Uda Leku here in Iparralde; I was also passionate about new technologies… Building a bridge between the new technologies and my culture carries me where I’m today.

So my most important motivation is just…  open your eyes and try to understand.

BBP: Why is it so important for the Basque Country to connect with the diaspora?

Benoît Etcheverry: A country that doesn’t have connections with its diaspora… is not a “real” country. I mean this country doesn’t know its story, and when thinking about business, the diaspora is the best way to introduce an activity at the international level.

Benoît Etcheverry: Well, there are already some examples where it exists.  One of them is a company in Switzerland, SOPHiA GENETICS, created by a friend of mine from the ikastola, Jurgi Camblong. What is SOPHiA GENETICS? “SOPHiA GENETICS combines deep expertise in life sciences and medical disciplines with mathematical capabilities in data computing. Our mission is to bring data analytics solutions to market, to support healthcare professionals by maximizing the power of Data-Driven Medicine. We achieve this mission through the global adoption of SOPHiA artificial intelligence.” And, last year, they created one of their services here, in Iparralde.

Another example involves our language, Euskara. A group of youngsters created, some years ago, Euskarabentura, which proposed to 120 teenagers between 15 and 17 years old to walk all across the Basque Country (both Iparralde and Hegoalde), and doing so only using Euskara. Over the past 2 years, some of the Basque diaspora have also taken part… While new technologies are important, the culture, language, and History with a big H are also important.

BBP: You’ve used various media — television, radio, the internet — to tell the stories of the diaspora. What is your favorite? What platform do you prefer to tell these stories?

Benoît Etcheverry: Clearly my favorite was EuskoSare, it was a big machine with a team really motivated to work with the Basque diaspora and, of course, the Basque Country.

After that experience, for 14 years, using the radio of Gure Irratia here in Ustaritz, I tried to create a radio program for all of the Basques in the world.  For those 14 years, it was the only radio program on air and in 4 languages. Today, I follow, in Euskara only, France Bleu Pays Basque.

BBP: Why do you think that the connections between the diaspora and the home country aren’t stronger than they are?

BBP: As you said, you are passionate about new technologies and you clearly take advantage of them in your work. Do you think those technologies are being used to their fullest? What opportunities do you see in the future?

Benoît Etcheverry: Sure, we have to create a lot of new things.  For example, like the Corsicans have done, a cellphone application with job offers (in the Basque Country AND in the diaspora). Another example, social networks — of course Facebook, but also others — just to try to find people who have my own name. In 2007, I found a list of all the existing Basque names, more than 10,000…  I simply made a search on Skype of 630 names. In this way, I was in connection via Skype with 4800 people. It was a strategy to inform people about the EuskoSare network.

In the end, the language is the biggest problem; there are not a lot of people speaking 4 languages (the Basque diaspora’s languages)… It’s the reason why I created a group on Facebook in 2008, to organize the translation of Facebook in Euskara…. And we did it !

BBP: Through your career, you’ve had the opportunity to interact with a large number of Basques and travel to many places in the diaspora. What are some of your favorite memories?

Benoît Etcheverry: Well one of my best memories involves one specific person, from Bidarray but living now in Biarritz. I met him for the first time in 2001, when I started my work with the Basque diaspora. At that time, everybody around me was laughing about what I was trying to do, and he was the only one who told me “Benoît, you are right to follow your work, it’s really necessary for us, but they don’t know it yet.” After that he became my mentor: Mister Noel Elorga.

After that, my best memories are my trips in 2005… Argentina and Jaialdi in Boise.

Another interesting memory: it was on December 3, 2012, for the International Day of Euskara. I was on air for the radio program 8 Herrialdeak Zuzenean, and the Hollywood actor Tomas Arana (Body Guard, Gladiator, Limitless, etc.) called us from Hollywood, talking with us for 15 minutes.

BBP: How can others, particularly those in the diaspora, help in building stronger connections between us and the home country? What would you recommend?

Benoît Etcheverry: Well, today there are about 200 Euskal Etxeak in the world with a total of about 45,000 members. First, I think all Euskal Etxeak should ask their members what they need? After that, we can create a new platform dedicated to making a compilation of the answers. And after that, a commission including institutions (from Iparralde and Hegoalde), but also businessmen, and a lot of citizens, working together to find a solution to all those needs. In this way, it’s the global Basque community that answers the call, and not just one institution, association or person.

BBP: Do you have any parting thoughts before we conclude?

Benoît Etcheverry: I remember I discovered your website about 20 years ago. The address was a long number and it ended in “.edu”  And I used your website to make some searches, to understand how a Basque in the diaspora looks in the Basque Country. I think the most important thing is understanding how the people we want to touch see things, politically, culturally, etc. Never say, look my friend, I’m Basque, I’m going to show you what the Basque Country is. As I say to a lot of Basques here… Never forget, Google, Internet, Facebook were created in the diaspora, and they know how to use these tools, certainly better than us. So open your eyes, and your brain. And learn!