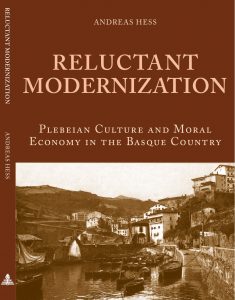 I just got this notice of a new book on Basque culture and was asked to spread the word.

Three institutions that are of particular importance to Basque history and culture form the main subject of this book: the baserria (the Basque farmstead), the cofradia (the fraternity of fishermen) and the txoko (gastronomic society). In this study the three institutions are seen as windows; once we look through these windows, we get an opportunity to see the larger picture – namely the structural components of a rich plebeian culture and moral economy. While the investigation of baserri culture provides insights into Basque rural life and the radical changes that occurred with industrialization, the cofradia allows the reader to see the connection that the Basque Country has with the sea. The third institution, the txoko or sociedad gastronomica, represents a more recent and urban phenomenon and reflects an effort to come to terms with urbanization and the anonymous forms of modern life. The book closes with some reflections on cultures that have been somewhat reluctant to modernize.

Andreas Hess examines the ritualized contexts in which a culture shapes people’s basic definitions of lifestyle, identity and social allegiance. What sets apart this work is the combination of an almost ethnographic description of the Basque cultural institutions … and the proposal for a paradigm change in the study of current Basque issues by grounding the analysis squarely on political economy. The results go well beyond the Basque case. — Professor Joseba Zulaika, Center for Basque Studies, University of Nevada