Anyone who has visited the Basque Country, or even attended a Basque celebration in the US, knows the central role that food occupies in the culture.  Today, the Basque Country is famous for its “new Basque cuisine,” which I did have an opportunity to try at a restaurant in Donosti (and, it was very good).  However, for the average person, what really stands out are the pintxos! 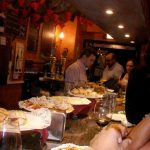 Enter any bar, in any town, and you will be confronted with a bevy of food just sitting on the bar.  Usually something delectable pinned to a piece of bread by a toothpick, pintxos are uniquely Basque.  In the rest of Spain you can find tapas, small dishes that are prepared to order and are what most tapas places in the US serve (this was how a woman from Valencia described it to me).  Pintxos are defined by the bread and the toothpick — the word pintxo means spike in Spanish.  And they are central to the bar-going experience in the Basque Country.  As you wander La Parte Vieja of Donosti, the Casco Viejo of Bilbo, or even the plaza of any small town, you stop at each bar, having a small glass of wine or beer, and maybe a pintxo.  They are part of the social txikiteo of Euskal Herria. 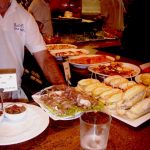 When I was visiting just a few weeks ago, a good friend of mine who I met in Seattle and who now lives in Donosti, Gonzalo Aranguren, took me to a couple of the best pintxo bars in La Parte Vieja (though, I’m sure, this being the Basque Country, there is a lot of debate over which pintxo bars are the best).  We stopped first at Gandarias. This place was full of people, even on a Thursday night, both tourists and locals.  In fact, we ran into one of the men who used to be the head of the Basque governments relations with the diaspora.  We had one of their signature pintxos, solomillo.  It was awesome!  We then headed to another bar, Goiz Argi, one that Gontzal’s uncle always demands to go to whenever he visits. There we had a skewer of shrimp, not the wimpy shrimp you find on salads in the US, but prawns, grilled to order and served again on bread.  I’m not a huge seafood fan, but the prawns found in Euskal Herria are near the top of my list of favorite foods (though, certainly below jamon serrano!).  Combined with some zuritos — small glasses of beer — or kalimotxos, this is a great lead-up to dinner or even a substitute for a regular meal. 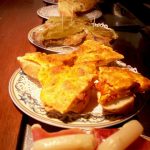 Donosti is well known for their pintxo bars, but even the smallest of towns has great food.  The Herriko Taberna of Munitibar, which is run by my aunt and uncle, is a great example.  As they prepared for a busy day of people coming to town for an anniversary mass, they went all out and filled the bar with pintxos.  They had the standard tortilla, both with and without chorizo, and jamon serrano with white asparagus, mayo, and hard-boiled 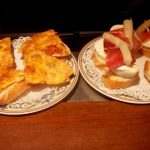 egg, but also more exotic varieties including beef tongue with green pepper, breaded zucchini on a bed of, if I recall correctly, scrambled eggs and mushrooms, and baby eels with garlic and red peppers.  I didn’t get to try all of them, especially considering that they were meant for the paying customers, but it was an awesome display.  My dad’s two sisters, helping their brother and sister-in-law on busy days, along with that sister-in-law were mad women, preparing food that served, along with the drink, as the center around which the entire social interactions of the afternoon revolved.  The food and drink, which facilitate the social life of the Basque Country, are such an integral part of that life that it is impossible to imagine a Basque Country without it.

I had a lot of other great culinary experiences during my week visit besides the pintxos.  As I mentioned, I got to try a 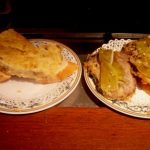 great restaurant specializing in new Basque cuisine in Do 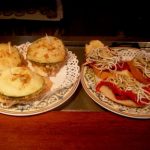 nosti, very near the University on Avenida de Zumalacerregui (I wish I could remember the name).  I don’t remember many of the dishes now, but there was one that was on a bed of rice, almost a risotto, and it was great.  One night for dinner, when my cousin and her boyfriend came over as well, my aunt made octopus galician-style.  I’m not a big fan of octopus, especially the texture, but it was very tasty and not at all rubbery.  And the desserts!  I have to admit, I have a huge sweet tooth and gain 5-10 pounds every time I visit, probably because I cannot resist the desserts.  Natillas, arroz con leche, cuajada (mamia in Euskara) — all are simply awesome.

If you are interested in trying your own hand at pintxos, a great site that includes lots of recipies is Todo Pintxos.

One thought on “Pintxos!”