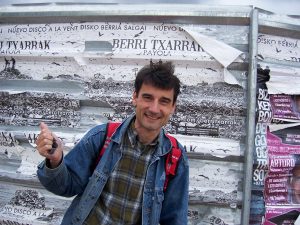 I have an unusual perspective on Basque identity as someone who can communicate in Euskara despite never having lived full-time in the Basque country, nor having any known Basque ancestry.

Many ‘clever’ people take as a given that one only learns a language for instrumental reasons (such as to find work) and not for the pure pleasure of communicating. People tend to learn the ‘big’ languages if they bother at all. It is easier to write off small peoples and explain them away.

And so, very few people from outside have tried to understand the Basques. I think of Orson Welles, George Lowther Steer, and Mark Kurlansky as those among the few who have made a start at doing so.

Big language people expect that others will learn their language to accommodate them. Not so the Basques.

Perhaps this is why I have seen doors open and faces completely change when I speak a few words of the Basque language — something that to me is just simple consideration and respect. And why we have made great friends and through them really become part of a community.

The reaction I have from people in on-line communities is similar. people look at my name and wonder what I am doing writing in Euskara. And they wonder how I know about Oskorri, Su Ta Gar, and other Basque cultural icons.

It has been said to me many times that “many people have lived here all their lives and they have not made an attempt to learn a few words of our language.” That said, there are many – including those with parents born in non-Basque Spain, who put a lot of effort into becoming Euskaldunak. Like friends of ours who are Basque learners and moved to Lekeitio so they could raise their children in a Basque-speaking milieu.

I am putting a bit of effort into learning Basque as well, spending a lot of time with the Ilari Zubiri blue grammar book, having graduated from Colloquial Basque. I haven’t taken classes, which has its downside.

What have I learned: There are other ways of looking at life than our self-satisfied, often wasteful, North American way. While each culture has its positives and negatives, we look with admiration at the Basques with their civilized public spaces, excellent transit systems, stewardship of scarce resources and many positive cultural traits. Most Basques would prefer to live closer together than to build sprawling cities of tract housing.

In my experience, a Basque does not spend a lot of time ruminating or navel-gazing or saying “woe is me.” They get on with it. A Basque does not say “we have to meet for lunch sometime,” for something to say. In general, a Basque does not pretend to be your friend on the first meeting. If you are a customer, he treats you as such, not as royalty. All of this takes some getting used to.

Without getting too philosophical about it, I think family life is stronger in the Basque Country because children and older folk are not as ghettoized. The attitude towards children in the Basque land is much more inclusive than in North America or Britain. I remember getting some blank looks trying to explain what a babysitter is. Or how we North Americans heedlessly move from one city to another.

After various visits to Euskal Herria, I think the culture has gotten a little bit inside of all of us in my family. I think speaking a language – even without having full command of it – changes our perspective on events, and becomes part of our identity. And when it is a “minority” language, like Basque or Welsh, we begin to identify with that group of speakers. We inhabit a shared world with our own cast of characters, places and stories.

I think it takes us out of our complacency and our tendency to individualism. It makes us somehow more “social” or part of a connected whole. And is this not what we as humans ultimately want to be?

David Cox lives in rural Ontario, Canada, with his family, and visits the Basque Country annually, or whenever possible. He writes for several internet-based publications including a music column, Altxor Bila, for Buber’s Basque Page.