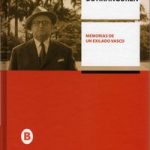 My friend, Gonzalo Aranguren, who wrote this Nor Naiz, Gu Gara entry, has a fascinating history.  He is one of those rare people who is American-Basque, rather than Basque-American.  That is, his mother is American, but he was born and raised in the Basque Country, though he has spent a lot of time in the US.

His interesting history extends to his great-grandfather, Luis Aranguren, who was the vice-mayor of Bilbao before fleeing to Caracas during the Spanish Civil War, where he died in 1957. Aranguren wrote of his experiences in a book, “Memorias de un Exilado Vasco,” which has just been re-edited and re-released by Inaki Anasagasti.  In the book, Aranguren talks about, other things, Bilbao at the turn of the century and his interactions with characters such as Sabino Arana and Horace Echevarrieta.  More information can be found on Inaki’s blog.