I originally wrote these thoughts in August of 2005 and thought I’d posted them here, but just realized I hadn’t.  In looking back, there are clearly some errors in what I wrote, which I’ve corrected. 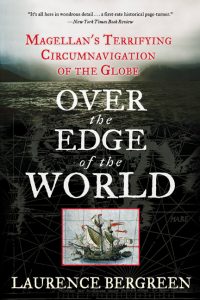 Over the Edge of the World, by Laurence Bergreen, tells the story of the first voyage around the world, the Magellan expedition. Drawn mostly from the accounts of the voyage chronicler, Pigafetta, as well as the pilot logs of other crew members, it tells how Ferdinand Magellan, a Portuguese, tried to get his king to fund a voyage to the Spice Islands by sailing west instead of east. After many refusals, Magellan finally decided to try a different avenue and approached the king of Spain, King Carlos, who agreed to fund the expedition. After assembling a crew and five ships, Magellan set sail from Sevilla to attempt the first circumnavigation of the globe.

Bergreen does a wonderful job of describing all aspects of the voyage, from the politics behind Magellan’s attempts to find funding for the voyage to the voyage itself. He tells about the trials and tribulations that these men encountered, as well as the jubilation they felt for their accomplishments. At the time, scurvy was still a scourge for sailors and, while he doesn’t belabor the point, Bergreen shows us how the men suffered during the long months at sea, how their food supply became infected with maggots, how the men had to eat the food anyways. When the “action” is slow, when the men are at sea just struggling to survive, Bergreen describes the suffering but doesn’t linger. Thus, he avoids potentially slow aspects of the story, focusing instead on when events took place.

Bergreen describes how the crew pushed through the straights of Magellan, thinking that they would soon find the Spice Islands, not realizing how big the Pacific Ocean was. Eventually, they encountered islands near the Phillipines, where they made contact with the natives, generally peacefully. As the expedition went on, Magellan seems to have gained a larger and larger god complex. In these islands, he began converting the natives to Christianity and they were willing converts, at least superficially. At times, though, he threatened them with violence if they did not convert. Eventually, he decided to help one group against some enemies, trying to nearly single-handedly defeat the enemy. As he and his crew came ashore of the enemy island, they began burning buildings. At this, the natives attacked and eventually killed Magellan. Magellan never finished the voyage.

By this time, at least one ship had left the expedition, leaving during the passage of the Straight of Magellan and returning to Spain. Another had been lost searching for the Straight. At the time of Magellan’s death, three ships remained. Juan Sebastian de Elcano, a Basque mariner from Getaria, Gipuzkoa, took command of the expedition [correction: Elcano didn’t take command until the expedition split, with one ship continuing West and the other attempting to go East; he was never Captain-General of more than one ship]. It was decided that one ship would return east to America to try to find Spanish settlements there (this ship eventually was captured by the Portuguese). At some point, one was destroyed because it was in such bad condition. The last ship, full of spices, sailed west under Elcano’s command. After many more months, this ship finally returned to Spain. Of an original crew of 260 men, only about 20 or so returned [correction: in the end, it was about 30 men], led by Elcano.

While noting Magellan’s foibles and faults, Bergreen obviously feels he was a great man, and that it was only through his sheer determination and will that the expedition was successful. Bergreen is less than glowing when discussing Elcano, describing him as a glory hog who took all of the credit for Magellan’s deeds. It seems to me a little unfair, as Magellan nearly destroyed the expedition in his quest for glory in the Philippines. Elcano steered a single remaining ship around the horn of Africa and back to Spain, a not insignificant feat. I would say that Elcano deserves some of the glory he received, especially considering that in the English speaking world, Elcano is essentially an unknown figure.

So, Elcano becomes the first European to circumnavigate the globe. But was he the first person? One of Magellan’s servants understood the language of the Philippine islanders and was probably from that region, having gone to Europe via the Spice trade or via Arabs who had explored the region. However, Bergreen points out that his trip around the world was mostly accidental, not deliberate.

Once Magellan had been killed, the other crew forced this servant to stay on and translate for them. This led the servant to plot with the locals to betray the crew. They staged an elaborate dinner for much of the crew and then slew them on the beach.

Overall, this was an excellent book, describing in rich detail Magellan’s expedition. It describes the wonder that the men in Magellan’s crew experienced when encountering the glaciers of the Antarctic, the peoples they found in these exotic lands, and especially the sexual practices that the Europeans found so fascinating.

Recently, another book, “Sails of Fortune” by Christine Echeverria-Bender was published which deals with this exact same expedition. It will be interesting to compare the two recreations of this very important and interesting voyage.