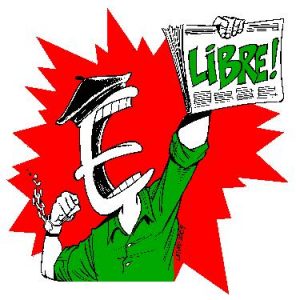 About 6 years ago, Egunkaria, then the only daily newspaper published fully in Basque, was shut down on suspicions of ties to terrorists.  Between then and now, no trials had occurred and it was thought that essentially the matter had been dropped.  However, now, 6 years later, those who worked at Egunkaria are indeed being tried, including Martxelo Otamendi, the editor of the newspaper.

EgunkariaLibre is a site that has two purposes: to support those being put on trial as well as disseminate news about the happenings surrounding Egunkaria, it’s shut down, and the people who worked there.

These events have reached even those Basques living in the United States.  This article in the Idaho Statesman describes how Otamendi previously visited the US to report on, other things, the Idaho legislature’s non-binding memorial supporting the Basque Country’s right for self-determination.  He stayed with Dave Bieter, now the mayor of Boise.

This was the second such newspaper shut down by Spain.  Before, Egin was also shut down.  As was said by Paddy Woodworth in that article, author of The Basque Country: A Cultural History:

“I believe that if there are serious charges against a medium of communication, sufficient to justify the precautionary measure of closing it down, they should be heard within weeks, not years,” he said. “Otherwise the state is very open to charges of suppressing press freedom.”