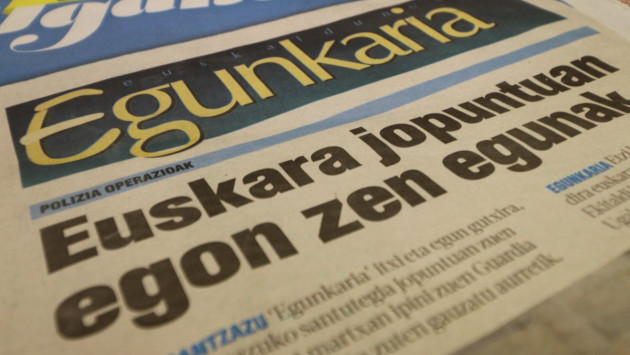 Today, if you go to the Basque Country, you will see Basque media pretty much everywhere. There is a Basque-language television station, a Basque newspaper (Berria), Basque radio stations, and Basque magazines. There are bookstores full of books written in Euskara. However, the concept of a daily newspaper written entirely in Basque is relatively new. […]

At the time of its closing, in 2003, Egunkaria was the only daily newspaper published solely in Euskara.  It had been in operation for 13 years.  In 2003, however, Spanish authorities raided the offices of Egunkaria, confiscating computers and equipment, and arresting many of the leading figures of the newspaper.  The charges were association with […]

About 6 years ago, Egunkaria, then the only daily newspaper published fully in Basque, was shut down on suspicions of ties to terrorists.  Between then and now, no trials had occurred and it was thought that essentially the matter had been dropped.  However, now, 6 years later, those who worked at Egunkaria are indeed being […]