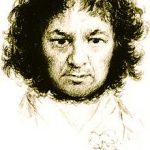 1746: Francisco José de Goya y Lucientes is born in Fuendetodos, Aragón. His grandparents were from Zerain, Gipuzkoa.  Goya goes on to be one of the most important romantic painters.  Besides being named First Court Painter by Charles IV, Goya chronicled the Peninsular War through his art in the series The Disasters of War.  After becoming deaf in 1792 after a sickness, his paintings take on a much darker atmosphere.  In particular, his Caprichos depicts “the innumerable foibles and follies to be found in any civilized society, and from the common prejudices and deceitful practices which custom, ignorance, or self-interest have made usual.”

1794: It is decreed that the church in Aroue, Zuberoa, be taken and that a Temple to Reason be established there. The silverware and cloth of the church is to be confiscated and sent to the district of Mauleon.

1912: The Centro Vasco Euskal Erria is founded in Montevideo, Uruguay. It was proceded by a circular entitled “Arriba Euskaros” and by the work of Euskaldunak Denak Bat, an organization founded in San Jose by Regino Galdos originally of Vallabona and Atanasio Zabala.

1974: The political party Herriko Alderdi Sozialista is founded. In 1975, it merged with Euskal Elderdi Sozialista, forming EHAS, and later HASI, a component, in 1979, of Herri Batasuna. It is founded in Baiona by the more radical wing of Enbata, including Manex Pagola, Manex Goiheneche, J.L. Davant, and Battito Larzabal.