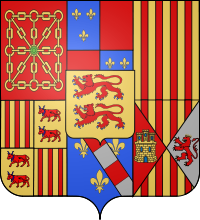 1555: Henry II, king of Nafarroa, dies. His father, John III or Jean d’Albret, had been defeated in 1512 by Ferdinand II of Aragon, both of whom had claimed the throne of Nafarroa. After that defeated, that portion of Nafarroa south fo the Pyrenees was annexed by Ferdinand while what became Nafarroa Beherea stayed in the House of d’Albert. Henry II tried to recapture the throne, but was unsuccessful. He was later taken prisoner at the Battle of Pavia during the Italian wars, though he escaped under disguise. As King, he restored the Parliament and other Nafarroan institutions in Nafarroa Beherea. He was married to the celebrated Marguerite de Valois. His daughter, Queen Jeanne III, converted to Calvinism and promoted a translation of the Bible into Basque, one of the first works in the language. Her son, Henry IV King of France, was the first of the Bourbon kings.

2 thoughts on “Today in Basque History: Death of Henry II King of Navarre”