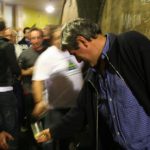 This article in the UK’s Guardian introduces 10 different Basque Cider Houses, or Sagardotegiak.  If you haven’t sampled Basque “Apple Wine” (the literal translation of sagardoa), you need to do yourself a favor and head to one of these Sagardotegiak.

I’ve been fortunate enough to visit two Sagardotegiak, one outside of Donostia when I spent a year living in that city and another time in Fika, Bizkaia.  They were both very nice, but very different, experiences.  In the one outside of Donostia, we all stood around high tables and food was brought to us in an appetizer fashion, with plates of bite-size chunks of steak, patatas fritas, and so on.  In Fika, we sat at a regular table, much as any restaurant, and ordered off a menu.  What both had in common, though, is that every once in a while, someone would let out a call and everyone would line up as they opened the tap on one of the kegs of cider.  As each person got to the head of the line, we put our glass under the flowing stream and got our fill of cider, at least until the next call.  It is important to let the cider travel a long ways before hitting your glass as it lets the cider aerate, giving it a bit more flavor.

Basque cider is a bit different than most other hard ciders I’ve had.  It isn’t sweet at all, it is very dry and somewhat harsh on the tongue.  It is an acquired taste, especially from an American point of view.  The ciders I’ve had in the US and UK were sweeter, good in their own right, but a very different beast.

I don’t remember now the name of the Sagardotegi I went to in Donostia, so I don’t know if it is on the Guardian’s list.  Based on the description, it could be that first one, Zelaia. In any case, it doesn’t matter much — this list seems like a good excuse to go touring the various cider houses and maybe making my own top 10 list.

Anyone else have sagardotegiak to recommend?

Photo from the Guardian article.