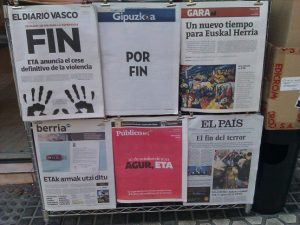 Yesterday, ETA officially announced the end of its campaign of violence. While viewed with skepticism by the main political parties of Spain, this is a historic day for the Basque Country. And one that was inevitable.  While the PP and PSOE make typical remarks about how we’ve seen this before and how can we trust this one is real, the fact is that ETA had very little support amongst the Basque populace.  Even ETA prisoners in Spanish jails had called on them to end the violence.

This, of course, doesn’t mean that everyone is suddenly happy with the status of the Basque Country within Spain.  There are still groups that want independence.  Now, however, all of those groups are working through the political process rather than using violence as a means towards this end. The end of ETA’s violence, combined with the recently declared legality of parties such as Bildu, offers independence-minded Basques other legitimate avenues to express themselves and make their voices heard.

There is still a lot of uncertainty about the political future of the Basque Country, but this announcement certainly makes that future seem brighter.

Photo shamelessly stolen from Luistxo Fernandez, who found it here.