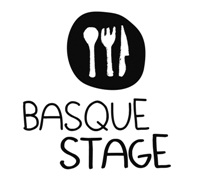 November 14, 2011, (ALICANTE, SPAIN): Chef Martín Berasategui has announced the winners of the 2012 3rd Sammic Scholarship with BasqueStage at Lo Mejor de la Gastronomía in Alicante Spain. The winners are Ruth Selby and Elisha Ben-Haim, and they will join the kitchen of Restaurante Martín Berasategui, ranked in the San Pellegrino World’s Top 30, beginning in January 2012. They were chosen out of over 70 applicants in this, the third round of BasqueStage by a star-studded jury consisting of Chefs Berasategui, Pedro Subijana, Eneko Atxa, Hilario Arbelaitz, TV star David de Jorge and Sammic’s Managing and Marketing directors Jon Markina and Amaia Altuna.

Ruth Selby is a graduate of the Culinary Institute of America in Greystone, California. She is a promising young chef who has experienced nearly every facet of the food industry. Not only has she worked in kitchens, she has toiled on the farm, growing and selling produce for other chefs to use. She has also seen the editorial side, writing and working in the test kitchens of Saveur Magazine. She has previous experience cooking in Spain, and we are excited to welcome her to the kitchen of Berasategui.

Elisha Ben-Haim is from Israel and is a graduate of the CIA in New York City. He boasts an impressive resume of jobs and stages, everywhere from New York institutions like the Russian Tea Room to the lauded Del Posto. He brings a dedication sharpened by work in the kitchen as well as combat service and hiking the Appalachian Trail.

BasqueStage is a program that gives cooks the opportunity to learn from some of the best chefs in the world, up close and personal. It is an initiative sponsored by Sammic, with the collaboration of Martín Berasategui, and coordinated by DeliFunArt, a marketing company based in San Sebastián.

Basque chef Martín Berasategui has earned almost every international culinary award, including 3 Michelin stars for his restaurant in Lasarte. In fact, the high ratio of Michelin stars to population in the area is partially due to his nurturing of other young chefs.

Sammic is one of Europe’s leading designers and manufacturers of Foodservice Equipment, specializing in Food Preparation, Food Preservation, and Hot Temp Ware Washing. Longtime technological partner of chef Martín Berasategui and based only 30 kilometers away from his restaurant, this 50-year-old company has just started operations in the US.

One thought on “BasqueStage Winners Announced!”