It seems like we are in a special time for Basque films. A number of projects are either in production or just wrapping up for release that promise to highlight numerous aspects of Basque culture. Here are a few that have caught my eye.

The first is Basque Hotel, by Josu Venero:

Basque Hotel is a U.S. road movie, a visual record, and testimony, in which stories are interwoven to create an overview of Basque emigration to this part of the world. It passes through the extensions of the old American West (Nevada, Idaho and California) and hits the streets of New York, the city where everything is a mix and comes to life. Five renowned novelists weave a web of real and fictional spaces through dialogue, history and experiences of the Basque community in the United States. In this literary tour, the voice-overs are heard giving fragments of the various novels of the writers (Robert Laxalt, Bernardo Atxaga, Asun Garikano, Joseba Zulaika and Kirmen Uribe). The testimonies of these players and their writings rebuild their visions and American experiences, sketching a spectacular journey from the Basque Country to the United States; and from the Basque Hotel to the Guggenheim Museum in Bilbao.

Izaskun Arandia-Richard’s film, To Say Goodbye, is an animated feature about the refugee children who fled the Basque Country during the Spanish Civil War to England, where they remained:
TO SAY GOODBYE is a powerful and inspirational film about the loss of childhood, the stripping away of identity and, ultimately, the hope of reconciliation, all set against the backdrop of the Spanish Civil War.Through innovative animation, the film tells the story of the 4000 Basque children evacuated to the United Kingdom in 1937.
Forced to bid a hurried farewell to their parents, these children were told they would only be in the UK for three months. 75 years later, some are still there, forever separated from their parents and their homeland, their families torn apart and their childhood destroyed by a brutal and bloody conflict.Through the voices of 14 of these children, now in their 80s & 90s, we reveal this tragic episode in history in a stunninganimated documentary that is profound, unexpected and uplifting.

Basques in the West, directed by Amaya Oxarango-Ingram and Brent Barras, is a filmed aimed at documenting the Basque contributions to the culture of the American West:
The Basques have been around for generations in these areas, herding sheep and adding their vibrant culture to the beauty of the land.
The documentary we intend to make features the Basque people, what they have done to add culture and vitality to the west, the sheep industry, and the central tension they face with keeping with their traditions and adapting to the modern world.

Released a few years back, Artzainak: Shepherds and Sheep, by Javi Zubizaretta and Jacob Griswold, examines the sheep industry, and follows the connection between the previous generation of Basque herders to the current Peruvian herders:
Artzainak: Shepherds and Sheepis a short documentary that exposes the struggles and hardships of immigrant shepherds in the hills of Idaho. The film traces a basic outline of the Basque and South American immigration to this breath-taking region of the American West. Spending as many as 9 months out of the year in the hills, these immigrants battle loneliness and despair while they remain thousands of miles from their families. With little to no command of the English language, the shepherds quietly make an honest living to send money back to their homelands. “Artzainak” tells these stories from the mouths of the shepherds themselves.The documentary was produced during the fall of 2009, and the filming itself took place in mid-October. Javi Zubizaretta and Jacob Griswold spent a week in Idaho, interviewing shepherds and watching them work as they brought the sheep down from the mountains. The film is currently being submitted to film festivals around the country to bring awareness to the problems faced by these individuals. 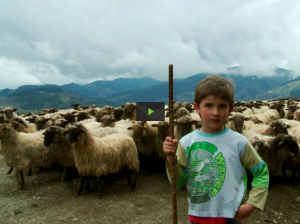 A final film, Emily Lobsenz’ Ipuina Kontatu, has finished principle photography and is entering the editing process:
They speak one of the world’s most ancient languages, established one of the world’s first democracies and lead Europe’s Age of Exploration. For hundreds of centuries Basques have maintained their traditions while flourishing among Europe’s most innovative societies. Yet, for centuries their way of life has confronted threats as powerful as the Roman Empire, as transforming as the Industrial Revolution, as tragic as a dictator’s genocidal aggression and as universal as immigration.
Who are these people and how have they navigated the ages as one of Europe’s most ancient cultures to be one of its most flourishing modern societies? And are the Basques capable of continuing their way of life even in today’s world? While unique and dynamic characters enact that drama on the screen, a complex cultural portrait emerges.
In the Basque language, ‘Ipuina Kontatu’ means telling stories. Basques have passed their language and customs down the generations through an oral tradition. The narrative design captures that tradition by exploring Basque culture through personal tales and perceptions of its protagonists. The characters’ personal tales will be woven together so that their stories not only complete one another, but also create a dialog between them that calls into question not only Basque traditions and their place in today’s world, but also cultural traditions in general and their relationship to social progress.

If anyone knows of other films that are being made, please let me know!

8 thoughts on “A Bevy of Basque Films”