Here are two articles that provide some interesting Basque history, both outside of the Basque Country. 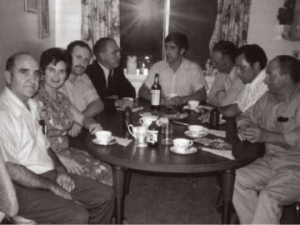 The first, an article at the Blue Review by Kyle Eidson and Dave Lachiondo, describes an interesting period in the history of the Basque diaspora in Boise. During the middle of the 1950s, when new Basques were immigrating to the United States from Franco’s Spain, there was much more political awareness of what was occurring back in Spain than had been true of the previous generations. Many of these Basques had experienced life under Franco’s rule, and were interested in what they could do against it. This lead to the formation of the group Anaiak Denok (All Brothers), which brought together like-minded Basques who discussed these issues. The most prominent member, Pete Cenarrusa, was of course also heavily involved in Idaho politics, and his two passions often overlapped. Dave and Kyle describe how, in the end, it was different views of ETA that ultimately lead to the end of the group.

Also related to the after-effects of the Spanish Civil War, the second article, published on the Bristol Post’s website, delves into the role that the city of Bristol played in adopting 4000 Basque refugee children escaping the ravages of the War. These children, ranging in age from 5-15 years old, were originally expected to spend only about 3 months in the UK before being returned to the Basque Country. Things didn’t turn out quite like that.

There is a funny little anecdote that the children misunderstood and thought that the straw that was being used for their bedding was what they were meant to eat for dinner.