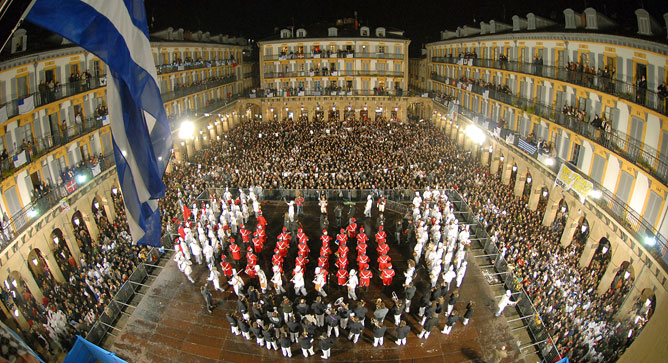 Every year, the fine people of Donostia celebrate my birthday in the most magnificent way. Armies of people dressed as chefs and Napoleonic soldiers parade through the streets, pounding on drums and generally making merry. The fiesta begins on midnight of January 20 and ends precisely 24 hours later — literally an entire day dedicated to celebration. Of my birthday. Seriously! Well, ok, maybe not.

According to Wikipedia, that font of all knowledge on the internet, what would become La Tamborrada (Danborrada in Euskara) began in the 19th century, as a way for the citizens of the city to mock the invading soldiers that marched through their fair city. There is also a legend that a chef was trying to get water from a well and that the women nearby began banging on pots, which caused the well to keep flowing. Today, as the Basques have few reasons to celebrate normally, they evolved this fiesta into a 24-hour bash.

I was fortunate to attend once, in 1992, naturally on my birthday. My 21st birthday, to be exact. Which was fortunate, since I could then partake in the festivities and consume my share of libations. Fortunately, Facebook did not exist back then, so there is no shameful documentation of that evening. But, it was during that night when I learned about “Arriba, abajo, al centro, al dentro” and something about throwing things off the balconies of the apartments lining the streets of the Parte Vieja. I don’t recall now if it was for beads, or people themselves.

Anyways, the latest edition of La Tamborrada has come and gone. This year, the city of Donostia had a photo contest, where people could send their best photos from the fiesta. The winner would get to watch next year’s opening of the fiesta, La Izada, from the city balconies in the Plaza de la Constitucion. Some of the photos are up on Twitter. There are some pretty cool images there that highlight the grandeur of the fiesta!

Unfortunately, I only learned about this after my birthday had come and passed. Maybe next year. If you are there next year, you might keep an eye out for this contest, if they repeat it, so you can have the best seat in the house. And invite me to sit next to you.