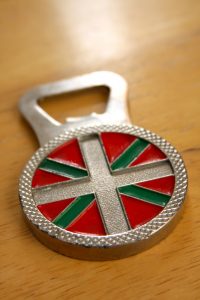 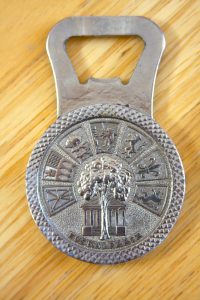 I’d thought I’d posted this one a while back, but apparently not.

When I was a student at the University of Idaho, one of the guys in the same dorm as me found this bottle opener on the street somewhere. This was after I’d spent a year living in Donostia and my Basque fanaticism was no secret. So, he gave it to me.

It’s a pretty hefty bottle opener, with the ikurrina on one side and a representation of the Basque coat-of-arms on the other, with each panel of the coat of arms surrounding the tree of Gernika, all set over the word “Euskalerria.” There are seven panels, as you can see in the photo, which is interesting design as, while there are sort of seven panels on the normal coat of arms, two of them combine to form one. (Nafarroa and Behenafarroa share one, the chains, so that there are really only six different coat-of-arms for the seven provinces.) From what I can tell, the seven panels on the bottle opener belong to (clockwise from the first): Nafarroa/Behenafarroa, Gipuzkoa, Bizkaia, Araba, Lapurdi (the 5th and 6th panels), and Zuberoa. The ikurrina on the other side is a bit worn. In particular, the white has chipped away, though the red and green are still very much intact.

Has anyone seen a bottle opener like this before? I’m very curious as to where it came from/who made it and what else might have also been made by the same designer/company.