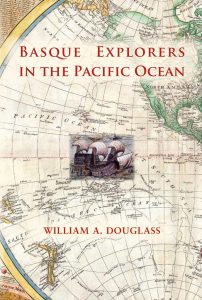 William A. Douglass, one-time Coordinator of what is now the Center for Basque Studies at the University of Nevada, Reno and prolific author on Basque history, is out with a new book on the Basque explorers who navigated the Pacific Ocean, from Elkano (the Basque sailor who took over Magellan’s expedition when Magellan was killed in the Philippines) to later explorers.  Basque Explorers in the Pacific Ocean recounts the stories of these Basques and their role in Spanish and ultimately European activities in the Pacific. From the website:

The Pacific Ocean was for several centuries, from the discovery of the Strait of Magellan in 1520 until Cook’s voyages in the 1700s, considered to be the “Spanish Lake.” However, Spain was never a monolithic entity and this book then considers “Spanish” exploration in the Pacific from the perspective of the Basques, who have an important maritime tradition and were key figures in Pacific exploration. From Juan Sebastián Elkano’s taking over command of the Victoria after Ferdinand Magellan’s death and completing the first circumnavigation of the planet to Andrés de Urdaneta’s discovery of the north Pacific route from the Philippines to modern-day Acapulco, Mexico, Basque mariners and ships were pivotal in European incursion into this vast area.

2 thoughts on “Basque Explorers in the Pacific Ocean by William A. Douglass”