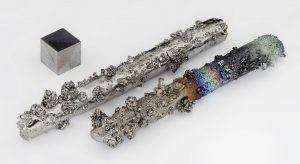 The element tungsten was discovered by two Basque brothers, Juan José and Fausto Elhuyar Lubize, in 1783?

Tungsten is an incredibly important element. Having the highest melting point of any element, it is extremely hard and durable, used in light bulbs, x-ray tubes, as piercing armament, and catalysts. Tungsten is also proposed as an important material for ITER, the demonstration fusion reactor being built in France. 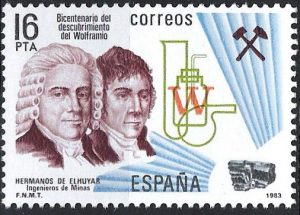 The Elhuyar brothers were born in Logroño, La Rioja (Juan in 1754 and Fausto in 1755) to French-Basque parents from Hasparren, France, in the Basque province of Lapurdi. Fausto, at least, became a professor at the University of Vergara and later founded the School of Mines in Mexico City.

Today, the Elhuyar Foundation is dedicated to bringing together science and the Basque language.

Tungsten, officially known as wolfram, is a Swedish word that means “heavy stone” while wolfram means something like “wolf’s froth/cream”, as a consequence of the extraction process of a mineral containing tungsten. If the Elhuyar brothers had given it a Basque name, maybe we’d now be calling it harri-astuna or otso-apar.

The Auñamendi Eusko Entziklopedia has more details (in Spanish) on both Juan and Fausto, including short videos.