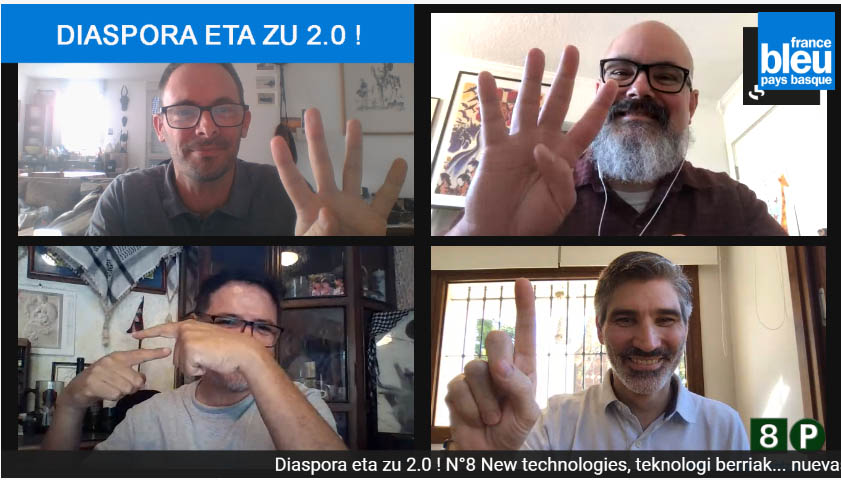 On Sunday, I was fortunate enough to appear on Benoit Etcheverry Macazaga‘s new radio program. Benoit has been a fixture in promoting Basque culture on the Internet for many years, hosting multiple radio programs dedicated to the Basques. His most recent venture, Diaspora eta Zu 2.0, is really focused on the Basque diaspora and connecting the diaspora with the motherland. I’ve “known” Benoit for many years, since the time he contributed an article in French on “le Rebot” (looking at that page, I realize I need to fix a lot of the accented script on my pages!!!). However, it was only this week, when he invited me to participate in Diaspora eta Zu 2.0, that I finally got to “meet” him face to face.

There were four guests on Sunday’s program, which focused on how new technologies impact the diaspora and the relationship with Basques in Euskal Herria. Frequent guest Esther Ciganda, who was born in the United States to two Basque immigrants but has returned to live in Euskal Herria, shared her experiences using the internet to interact with Basques all over the world. Alex Eguia, out of Mexico, runs EuskoBlog, a blog “from the diaspora for the diaspora.” Gonzalo Auza, who was the director of EuskoSare, a website and initiative that aspired to create a Global Basque Community (Gonzalo was one of the first, if not the first, person to use this phrase), joined from Argentina. And then, of course, there was me.

The premise of the shows was new technologies, and you can hear the entire program here. However, there were a few points I wanted to mention and potentially go into a little more deeply.

One topic was about the relationship of the diaspora to Basque culture. Esther made the excellent point that many Basques in the diaspora are more strongly connected to elements of Basque culture such as folk music and dancing than their contemporaries in the Basque Country itself. Many Basques in Euskal Herria respond to questions about if they can dance or if they enjoy folk music with a “meh.” For them, they don’t necessarily need these elements to feel a connection to their Basque culture, as they grow up being Basque. On the other hand, this is a relatively easy way for Basques in the diaspora to display their culture, to express their identity. Without other elements to hold on to, elements that are more challenging to develop such as language, these become very visible and expressive ways to highlight their culture. However, as noted by Alex, often this leads to myths that arise in the Basque diaspora, myths that become part of the diaspora’s culture but don’t necessarily resonate or have much to do with the culture as expressed in Euskal Herria. Myths that, for example, everyone dresses with a txapela, dances the jota, and plays the txistu.

Before, when my dad and people like him came over, and before, there was an influx of people from the Basque Country that brought their experiences with them, that helped informed what their children and the people around them knew about the Basque Country. My dad didn’t dance the jota, didn’t play the txistu, and rarely wore a txapela. But, he was Basque through-and-through and, just by being, he conveyed some aspect of the Basque Country. Now, however, as there is less incentive for people to emigrate from the Basque Country to places like the United States, that flux of people has dropped almost to zero, and that direct connection with the Basque Country has weakened. And, as pointed out by Esther, many in the diaspora never get a chance to visit Euskal Herria, the land of their ancestors, so never have a direct experience. On the other hand, Benoit noted how, even a hundred years ago, to have a cousin in the Americas or Australia was almost part of the definition of being Basque. The people of the Basque Country had a direction connection to the rest of the world through family. That connection is also being lost and, with it, some greater understanding of the rest of the world.

So where does that leave us? The literal ties that bind us together, the men and women that crossed the ocean looking for opportunity and a better life, are slowly disappearing and not being replaced. Both sides are weakened as those ties start to unravel. In the diaspora, as we grab onto dance and folk music as some tangible manifestation of that culture, we become more removed from the reality of the Basque Country. Euskal Herria is a modern, thriving country, pushing the state-of-the-art in science and technology and innovating in areas of gastronomy. It is a place where heavy metal and rap co-exist with folk music, where the serenity of the baserri stands next to the towering skyscapers and hulking Guggenheim. It is a place of contrasts, where certainly the folkloric elements exist and, in many cases, flourish, but where people are creating new industries and living lives that, day to day, focus on concerns other than these visible displays of Basque culture.

And, the people of the Basque Country lose that connection with the rest of the world. They start to lose those advocates that spoke so strongly for them around the world. They lose that base of talent and ideas that came from far away that only helped strengthen the society back home. And, they lose the sense of a global network, the type of interconnectedness that Gonzalo and EuskoSare tried to foster, in which there are Basques all over the world that, in their own little ways, support the Basques back in Euskal Herria.

These connections have another benefit. As discussed by Gonzalo, not everyone finds dance and music to be their preferred way to express their culture, their Basque identity, but in the diaspora, other modes of expressing that identity are lacking or difficult to develop. Dance and music are very visible ways of expressing culture that are relatively easily accessible. For those who aren’t into these things, there may almost be a sense that they aren’t as Basque as others. But, in the Basque Country itself, there are so many other ways one can be Basque. Having strong connections between Euskal Herria and the diaspora provide new opportunities — new modes — of cultural expression and provide for a richer landscape overall for all of us.

The theme of Sunday’s show was new technology and its role in the relationship between the diaspora and the Basques back in the Basque Country. I like to tell a story about my dad that highlights how I think technology might help. Of course, as noted by Alex, technology has its pitfalls, and there are dangers, such as the trolls that constantly arise out of the depths to plague any online community. However, in the long run, I believe technology will help us maintain, at least to some limited extent, the connections between Basques across the world.

When I was a kid, I didn’t know my dad’s family back in the Basque Country at all. He was the eldest of eight children and was the only one to leave Euskal Herria. The rest stayed behind, building lives and families in the homeland. My dad, first as a sheepherder and then as a truck driver, built what he could in the US. But, back then, it was expensive to travel, and the few times he did go back to Euskal Herria — literally less than five times in the first thirty years he lived in the US, typically for a wedding — he went alone. He called his family maybe once a year, around Christmas time, as the calls ended up costing so much. As a result, I had no connection at all with his family. I barely knew their names, I certainly didn’t know the names of their children. I didn’t meet my grandmother until I took my first trip over when I was twenty.

However, near the end of his life, my dad was on his cell phone constantly, talking with his brothers back in Euskal Herria. They talked seemingly daily, calls crossing the globe from both directions. He got to know his youngest brother, who had not been much more than a toddler when my dad left home. He got to know his nieces and nephews better. And, as a result, we all got to know them a bit more, we all got and shared news much more frequently and became just a bit more of a family than we had been before. I witnessed a real benefit to the new technologies that are so pervasive and, yes, in many cases disruptive to our lives. But, I also saw how they could help build new bridges between the Basque Country and the diaspora that might help us keep those connections alive. The materials might be different, but the bridges may yet survive and, hopefully, thrive.