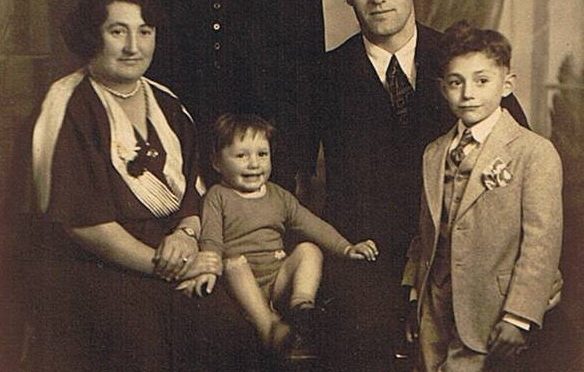 Pierre “Peter” Paul Parisena Mendionde was born on March 3, 1925 in the French town of Bordeaux, to parents from Nafarroa Beherea. His father, Jean “John” Santiago Parisena Maya, a veteran of the French Army during the Great War, was born in Banka in 1902, while his mother Catherine Mendionde Antchagno was born in Urepele in 1905. Although the exact date of Peter’s father’s immigration to the United States is unknown, it is known that at least three of his brothers (José, Francisco and Juan) also made the United States their new home. Francisco “Frank” and José “Joe” were born in Elbete, Nafarroa, in 1886 and 1897, respectively. José came to the country in 1920 and managed to run a small pension in the Californian town of Susanville in the 1930s.

Peter and his mother came to the United States in 1929 in the midst of a financial and socioeconomic crisis. At the end of that same year they were joined by their uncle Dominique “Domingo” Mendionde, who was only 17 years old. Born in Urepele in 1912, he resided in Southern California for most of his life, where he was dedicated to raising sheep. Domingo passed away in Chino, California at the age of 77. In 1930, Peter and his mother resided in the boarding house of his uncle José in Susanville. The following year Catherine had her second and last child, John, born in this northeastern California city.

Catherine and John eventually divorced, and between 1935 and 1940, the children lived with their father in Westwood, California, where he worked for a sawmill. Beginning in 1940, the children moved in with their mother and her now new husband in Reno, Nevada. According to Peter’s son Gary Parisena, “My grandmother ran the Star Hotel [for many years] on Second Street between Lake and Center [in Reno]. My family is Basque and they cared for Basque families.” [1]

Peter was in his final year of high school at Lassen County High School in Susanville when he enlisted in the Navy on November 20, 1943, in Sacramento, California. He was dispatched to the Farragut Naval Training Station, in Idaho, and from there he was assigned to the escort carrier USS Makassar Strait, where he served as a gunner from April 27, 1944 until the end of the war. Also on board the aircraft carrier was the Basque-American Raymond Jay Garteiz (born in Ogden, Utah, in 1922), pilot of Composite Squadron 97 (VC-97). From September to October 1944, the Makassar Strait had the mission of transporting replacement aircraft to Hawaii and the Admiralty Islands, located north of New Guinea, in the southern Pacific Ocean. From April to May 1945, the USS Makassar Strait entered the fray, participating in covering fire during the Okinawa invasion. Peter had the opportunity to demonstrate his prowess as a gunner, while Raymond flew adventurous bombing flights over the island. Replaced by the escort carrier USS Shipple Bay, which received Squadron 97 aboard, Peter’s carrier headed to the Mariana Islands in the northwest of the Pacific, where it became a training center. Finally, it carried out repatriation of soldiers.

Peter returned to Pearl Harbor, Hawaii, on July 29, 1945, and from there he was dispatched to the Naval Base San Diego, California. Unfortunately, his father had died two months earlier, on May 29, in Susanville. (His mother would pass away in 1979 in Reno.) Peter was honorably discharged on December 9, 1945 with the rank of Seaman Second Class. “He never discussed the war with his family or friends, he never revealed the name of his aircraft carrier or his general experiences. He told a couple of generic stories, but said he saw some horrible things,”confesses his son Gary. [2]

After the war, Peter returned to Reno where he worked in metallurgy for a time. He married and had two children. Peter passed away on July 24, 1988 in Reno, at the age of 63. He and his wife had divorced and the family had grown apart. Inexplicably, Peter was never buried and his remains, unclaimed, were kept by a local morgue. His brother John died five years later in Olympia, Washington. John had fought in the Korean War with the 1st Provisional Marine Brigade of the Marine Corps, being wounded in Seoul in 1950. He received the Purple Heart. The Parisena family, father and children, had taken part in three of the most important conflicts of the first half of the 20th century.

On April 12, 2019, 31 years after Peter’s death, he and 14 other veterans, whose remains were unclaimed at the time of their death, were finally buried, with full military honors, in the columbarium of Northern Nevada Veterans Memorial Cemetery in Fernley. “Five members of the Nevada Army National Guard and seven sailors from the Fallon Naval Air Station, along with members of the [Nevada Veterans Coalition] carried the urns to the columbarium […] Gary Parisena received a folded American flag on behalf of his father and the other 14 veterans.” [3]. Rest in peace.