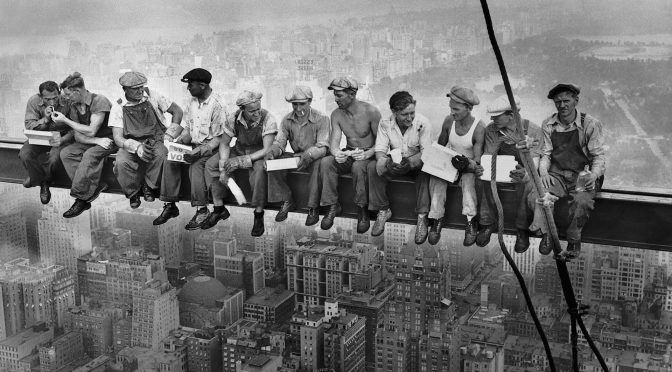 Lunch atop a Skyscraper is one of the most iconic photographs ever taken. Taken in 1932, it features 11 men casually eating their lunch while sitting upon a crossbeam dangling above New York City. The photo was a publicity stunt, taken to promote the construction of Rockefeller Center. Even so, much about the photo remains a mystery: Who was the photographer? Who were those 11 men? This last question has spurred a lot of speculation. There is now enough evidence that the second man on the left, the one lighting the cigarette of his coworker, was a Basque from Bizkaia — Ignacio Ibargüen.

Primary sources: Harresi Kulturala Elkartea, who have a series of articles detailing what is known about Natxo and the photograph; Lunch atop a Skyscraper, Wikipedia. A special thanks to Koldo San Sebastian and Eneko Sagarbide whose postings on Facebook alerted me to this story.

2 thoughts on “Basque Fact of the Week: A Basque in Lunch atop a Skyscraper”