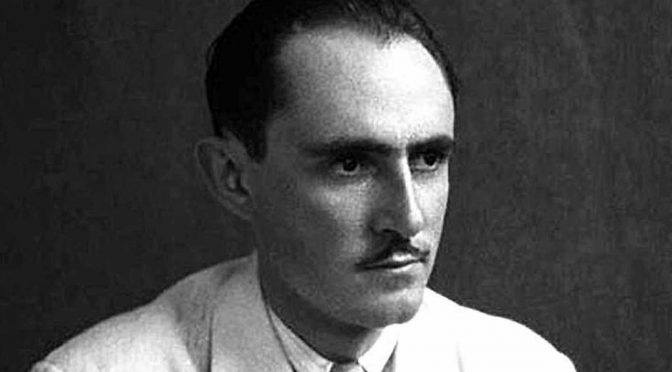 The aftermath of Spanish Civil War and World War II forced many Basque intelligentsia to flee their native land and settle elsewhere. Indeed, the Basque government itself was in exile. Many of those Basques eventually found their way to the Americas where they became important figures, both representing the cause of the Basque government or involving themselves in local politics. Jesús Galíndez Suárez did both and paid the ultimate price.

I’m Basque…some laugh, and others hate me.  That is all I have left when despair takes over and I wander through the streets.  I’m Basque, and far away there is a people that I belong to.  I am nothing, a mess of endless passions and desires.  But I’m part of that people, the people I see in my waking dreams, dressed as a gudari on my way to the mountain, I see him in the romerías and when night falls, on a street, I see him making an effort on the jai alai court, and in the fishermen going out to see, I see him singing and praying, I see him throughout the centuries.  I’m along, alone with my troubles.  But I will continue, I will continue on even though no one understands me in this Babylon.  And someday, I will lay down under the black poplar tree I chose on the top of a hill; in the lonely valley of my village, alone with my land and my rain.  They will understand me in the end…

Translation from About Basque Country.