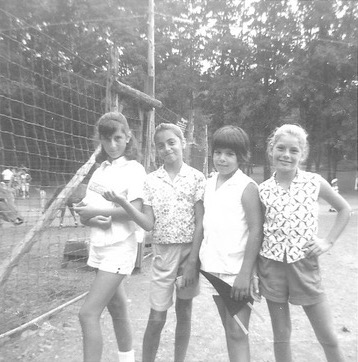 For those of us Basque-Americans that grew up in the West, we were surrounded by the sheepherders that came before us. Images of sheep wagons, bands of sheep, and sheepherder’s bread are common. However, the Basque-American experience is as varied as Basques themselves. Out east, the typical Basque immigrant was very different. Still driven by a desire for a better life, these Basques often found work in construction and similar occupations. And, the east coast, particularly New York, ended up being the home of many Basques fleeing the aftermath of the Spanish Civil War. Linda Uruburu grew up in this environment. In her book, Lenny’s Summertime Adventures (available here from the Center for Basque Studies), she captures the magic of that time, in which large groups of extended cousins roamed the country side, looking for adventure. In this interview, Linda describes the inspiration for her award-winning book and teases what might be next for Lenny.

Linda Uruburu: Thank you so much… what a pleasure this is! My grandparents on my father’s side both arrived in the USA in the early 1900’s – my grandfather’s family, Uruburu, from Forua and my grandmother’s, Ercoreca, from Mungia. They settled into the lower east side of Manhattan. The first meeting of the Centro Vasco, the first official Basque club in New York, actually took place in my grandparents living room. In 1918 my grandfather, Benito, was hired to do some road construction in a small village about 30 miles outside of New York City called Ladentown. He liked the area and eventually the family, actually his wife and her two sisters, bought a summer home there. More and more friends and family visited and the area soon became a small summer Basque enclave. We (my immediate family) moved there permanently when I was 9 years old. I do still have family living in Mungia and Forua.

BBP: You grew up in the Basque community of New York, which is different from the western communities many of us are more familiar with, particularly given the stronger political tendencies of the New York Basques. What was it like growing up in that environment?

Linda Uruburu: My grandfather died when I was 8. I know that he and his brother Tiburcio (one of the founders of the Centro Vasco) were very involved with the Basque community of New York but as a young girl I was not really aware of that part of their lives. My father was not political at all but he was a Basque through and through! He instilled in me a strong pride in my heritage.

BBP: You called your childhood home a “summer Basque enclave.” What was it like growing up surrounded by those Basques? What stands out in your memory?

Linda Uruburu: It was an amazing childhood. My extended family (relatives and neighbors) arrived in the beginning of the summer and stayed until the end, with a constant flow of visitors from New York City and Spain. My memory is filled with Basque and Spanish words and music and food and clothing. I’ve read that a central concept in the Basque identity is belonging, not only to the Basque people, but to a house or a clan. In the summers I always felt like I belonged to a family much bigger than my actual one. I guess that’s my most treasured memory.

BBP: Your book, Lenny’s Summertime Adventures, was published last year by the Center for Basque Studies at the University of Nevada, Reno. Can you give us a brief synopsis?

Linda Uruburu: Lenny is a young girl of Basque heritage who lives in the “Little House” at the foot of the mountains outside of New York City. As they do every year, her city cousins and relatives come to the “Big House” at the other end of the road to spend the whole summer. Lenny has a wild imagination and believes she saw a ghost in the mountains the past winter and she enlists her cousins to help her find it. The book follows the children’s adventures throughout the summer and is filled with Basque traditions and words.

BBP: If I understand correctly, your story won the Basque Writing Contest put on by the Center for Basque Studies. How was that? Did you write the story specifically for the contest or did you already have the seeds planted before?

Linda Uruburu: In 2007 my family had a reunion with over 100 Basque relatives from all over the USA and Europe (I moved to France in 2002 and have lived in Germany since 2006). The next day some of us wandered through the area, hiked into the mountains, and visited the family cemetery and places we remembered as children. When I returned from that reunion, I began to write Lenny’s story, inspired by our adventures growing up. When I read about the Literary Contest put on by the Center for Basque Studies I decided to submit my story.

BBP: What did it mean to you for your story to win the contest?

Linda Uruburu: I couldn’t have been more proud or shocked. The contest is for all genres and so the competition is tough. For years I have bought books from the Center for Basque Studies and to be recognized by that organization is an honor.

BBP: What inspired Lenny’s adventures? How much of your own experiences are part of her story?

Linda Uruburu: Lenny’s family and extended family are loosely based on my family and the local folk in the area I grew up in, at the foot of the Ramapo Mountains. The adventures are based somewhat on my childhood experiences but mostly come from my imagination.

BBP: What’s next for Lenny? Do you plan to continue her adventures?

Linda Uruburu: I’m working on a sequel right now. Having adventures comes natural to Lenny and so she is once again going to enlist her cousins to help her solve a mystery.

BBP: Might Lenny make it to the Basque Country in one of her adventures?

Linda Uruburu: In my story, the reader can follow Lenny’s adventures with her personal map of the neighborhood. Her next adventure will extend the borders of the map a bit. As for the Basque Country… who knows?

BBP: With your deep connections to the Basque Country, I imagine you’ve visited many times. What are your favorite places to visit?

Linda Uruburu: I am embarrassed to say that I have never had the chance to visit the Basque Country. It has always been a goal of mine but somehow life always seems to interfere. But I’m not giving up!

BBP: What advice do you have for up and coming story tellers who are hoping to share their own stories?

Linda Uruburu: Write what you know – the truth is always a good beginning. And don’t give up!