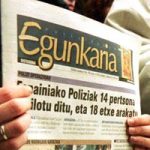 At the time of its closing, in 2003, Egunkaria was the only daily newspaper published solely in Euskara.  It had been in operation for 13 years.  In 2003, however, Spanish authorities raided the offices of Egunkaria, confiscating computers and equipment, and arresting many of the leading figures of the newspaper.  The charges were association with ETA.  Those arrested were Iñaki Uria, Joan Mari Torrealdai, Txema Auzmendi, Xabier Alegria, Pello Zubira, Xabier Oleaga, and Martxelo Otamendi, who was editor of the paper.

In a case that has lasted these 7 years, the five defendants that were still being prosecuted — Iñaki Uria, Juan Mari Torrealdai, Jose Maria Auzmendi, Xabier Oleaga and Martxelo Otamendi — were finally acquitted of any wrong doing.  During this time, Martxelo went on to become editor of Berria, currently the only Euskara-only newspaper in the Basque Country.  But, the actions by the Spanish authorities did result in the liquidation of Egunkaria’s assets and thus the closure of the newspaper, a result of a set of charges that not once lead to any conviction.

For more information, see this Wikipedia entry,  this report on EiTB, and this article by the Guardian.