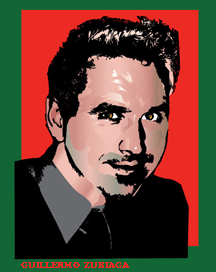 Identity is a very personal matter; I believe it is up to individuals to define themselves to their own ascription even today given the “Global Village” effect.

I don’t want to generalize, especially after reading Pedro’s beautiful “jungle” of rationalization, but, in all fairness and in the most possible realistic as well as legal terms, I think identity can be defined ethnically and culturally, as well as politically.

Quite frankly, I think these are elemental criteria in order to define any given group, whether the Basques, the English, the Apache, the Welch or the Hutu etc, and are what characterize any ethnic group. I also think they are not necessarily exclusive of any other. I do believe that nothing prevents the inclusion of any given ethnicity into a larger one, such as a Basque-American for instance, just as the inclusion of an ethnicity within another one doesn’t deny or negate the existence of either ethnicity, no matter its size.

I do however think it is very, very dangerous to measure degrees of Basquesness or any other group in ethnic terms. Yet it is also true that there has been a great deal of endogamy among Basques, especially in the old times and surely in the diaspora as well. Call it some kind of survival Eugenics, perhaps?

Regarding culture, I would not want to bore anyone with defining the term. However, by its own description, as a collective expression of any particular group, it is its capacity to evolve and endure that determines it. Culture by its own virtue can only exist if it can be passed on and kept alive through subsequent generations.

Particularly in this regard, Euskara, our “flag ship” of Basque culture, is the living paradigm of the development of a primal form of communication, linguistic values, norms of conduct, behavior, etc of a very, very — in our case — ancient heritage that has persisted till our own time, since I also believe that to speak a particular language determines quite a bit about the character of a given group as well as molding its perception of its own surroundings.

Regarding the political issue, this is a topic that for a long while I have wanted to avoid and omit. But I am afraid that in addition to the ethno-cultural aspect I have addressed I also have to include this one. The one that in all actual legal terms, whether we like it or not, is the one that establishes reality from the administrative, fiscal or legislative perspectives. I believe this principle should apply to all peoples or at least to those people whose voices simply want to be heard.

As is true of the Basque example, as well as many other should we say “medium to easily” identifiable stateless-nations, the Basques generally claim for themselves both a territory and sociopolitical structures. In other words; they claim to have a legitimate identity and presence.

I am nobody to hand out badges of good and bad Basques. I believe that as long as it is done in a lawful manner, choice will always be a very healthy exercise for any democracy. However I also think we must not forget that Basque nationalism, whether in the form of today, or in its past, in previous incarnations, whether as “foralism”, “larramendism” or any other form of expression or impetus for self-government, has done a lot to ensuring that Basques were capable of preserving more than just our language, but our sense of direction, our character, our laws, our democratic institutions.

As John Adams once wrote about the Basques: “Those people….who have had the skill, courage, and fortune**, to preserve a voice in the government.”

But then again I am also a romantic, so what do I know?

(** Ha,ha!! I’m sure fortune had something to do with it! As a very wise man once said: “That’s why we Basques are optimistic, Because our number was up a long time ago!”)

Guillermo is an illustrator and graphic designer who, born in Bilbao, now resides in New York with his wife and son.  He recently began work on his own graphic novel based on the history of Basque whaling; the first issue was released just last year.