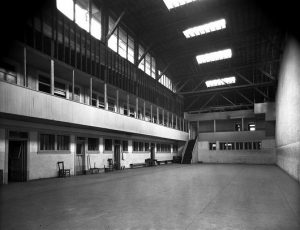 Anyone who has been to the Basque Country and visited any of the villages that dot the coast and the valleys between those peaks shrouded in mythology certainly knows the importance of the fronton to the Basque people. The plaza of most any town is often surrounded by the three corner-stones of Basque life: the Church, the tavern, and the fronton. I know best the one in my dad’s home town of Munitibar. Festivities may always begin with a mass at the Church, but they always center on the fronton, either a game of pelota or animal tests or a bertsolari contest. The fronton is the public space in which life happens.

The Basques who immigrated to the US brought their games with them. And, the fronton. A wonderful open-air fronton sits in my mom’s home town, Jordan Valley, Oregon. But, the oldest is in Boise. In fact, the fronton in Boise is probably one of the oldest sporting venues in the US. Like Wrigley Field in Chicago, it will turn 100 in 2014. The Jacobs-Uberuaga boarding house will turn 150 the same year. The Basque community in Boise is gearing up to celebrate these milestones, important not only in the history of Boise Basques, but Basques in the US as a whole. The fronton endures, just as the Basques have endured.

I personally am not overly familiar with Boise’s fronton. I may have stepped foot in it once as a kid. However, both Mark Bieter and Henar Chico have written wonderful testimonies about the role the Boise fronton has played in their lives. Mark describes the history of the fronton and how, to pelota players in the US, it is sort of the Wrigley Field of pelota. Henar, a newer resident of Boise, has become an aficionado of the fronton and the pala leagues that are very active. The fronton has become a very important part of her life in Boise. Both paint a picture, both past and present, of a building that has served as the cornerstone of the Boise Basque community for nearly 100 years. And, knowing the Basques, will likely be standing strong for another 100 years.

One thought on “Celebrating Boise’s Fronton”