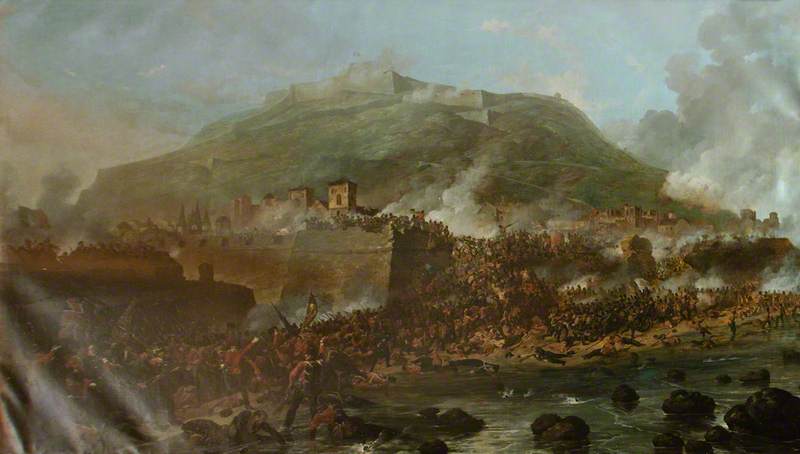 200 hundred years ago today, the Siege of Donostia began, which ended in the ransacking and devastation of the city by fire (see this Wikipedia article). This was part of a campaign, the Peninsular War (known in Spain as the Spanish War of Independence), lead by the British, to defeat Napoleon, who, upon taking over France, had named his brother King of Spain. The British forces, lead by the Marquess of Wellington, Arthur Wellesley, had just won the Battle of Vitoria and marched on San Sebastian to both “clear their rear guard” and establish a port for supplying their forces. After about two months of siege, they finally took the city. Discovering all of the “brandy and wine” of the shops, many troops got drunk and attacked the civilian population, burning houses, killing people, and raping women.

As an experiment in historical education, Euskomedia is recreating the Siege and Destruction of Donostia via Twitter. Two Twitter feeds, 1813tik in Euskara and 1813tik-es in Spanish, will relay the siege over the coming weeks to provide “real-time” updates on this historical event.

I think this is an awesome idea! It is a very cool way of using modern social media to educate people about history. It tries to capture the power of social media — the way it has been used in revolutions and uprisings in, for example, the Middle East — to recreate dynamic historical events of the past. I think this might be an excellent educational tool and I hope it catches on. The US just marked the 150th anniversary of the Battle of Gettysburg — something like this would have been a cool way for people to be more directly engaged in that anniversary.

I only wish they had an English Twitter feed as well!