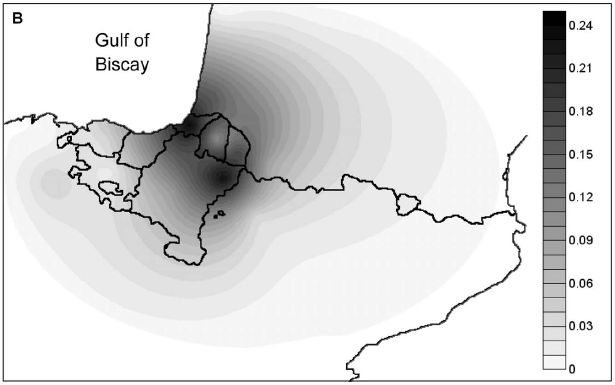 I’m not a geneticist, but I am fascinated by what modern genetics can tell us about the history and prehistory of humans. The Basques are particularly interesting because of the pre-Indo-European origins of the population. As more and more genetic studies are done, I think we will ultimately recreate a detailed map — both spatial and temporal — of the movements of not just the Basques but all human populations.

In a recent paper in PLOS One, a group of scientists from the Basque Country, Santander, and Florida examined mitochondrial DNA (mtDNA) from a group of people in “Franco-Cantabria” (which I assume is located in essentially modern day Euskal Herria). mtDNA is passed through females and tracing it provides data on the maternal ancestry of the people. The authors find that there is an unbroken genetic lineage back about 10,000 years to the local area. They conclude that their findings “provide robust evidence of a partial genetic continuity between contemporary autochthonous populations from the Franco-Cantabrian region, specifically the Basques, and Paleolithic/Mesolithic hunter-gatherer groups” and “these results give further support to the notion that the autochthonous populations currently inhabiting this region show perceptible signals of genetic continuity with Mesolithic hunter-gatherer groups that took refuge in the Franco-Cantabrian fringe during the last glacial and postglacial periods of Europe.” That is, as far as I understand, the current Basque population is directly connected to the people who inhabited the region at the end of the last ice age.

There still seems to be a lot that is unknown and it is hard to parse all of this data if you aren’t a specialist. But, these genetic studies and what they say about human populations and migration are very intriguing. I’d welcome more informed discussion on this, both what these kinds of studies say about the origins of the Basque population as well as their interactions with the rest of Europe.